When it comes to choosing a mate, female guppies don’t care about who is fairest. All that matters is who is rarest.

Florida State University Professor Kimberly A. Hughes in the Department of Biological Science has a new study just published in the journal Nature that is the first to demonstrate a female preference for rare males using an experiment in a wild population, rather than a laboratory setting.

This study of genetic differences in male guppies is relevant to understanding variation in humans as wellas in other organisms, Hughes said.

Hughes and her longtime collaborators studied guppies in Trinidad and found that male guppies with rare color patterns mated more — and lived longer — than the common males. The males’ color variations are genetic and not due to diet or temperature. And the males’ actual appearance didn’t matter to the females, who are tan in color and do the choosing of mates.

“No matter which color pattern we made rare in any group, they mated more and had more offspring,” Hughes said.

So, a male guppy common in one grouping, i.e., placed in a stream with many fish that look like him, is a dud to the females also in the stream. But, take that common male and place him in a different stream with only one or two others similar to him, and he’s suddenly rare — and a desirable mate.

In an earlier study, Hughes showed that male guppies with rare color patterns had a survival advantage compared to those with common patterns in natural populations. During a three-week study, also in Trinidad, 70 percent of common males survived, while 85 percent of rare males survived.

This new study, “Mating advantage for rare males in wild guppypopulations,” reports the results of paternity analyses of the offspring produced bythe females in that earlier field experiment.

Hughes approached this new, rare-male-as-mating-champ theory with the goal of ruling it out. She thought it was unlikely.

But, “We got a big, significant result,” she said.

Guppies (Poecilia reticulata) are an ideal species for this study, Hughes said, because the males’ color variations are so visible and because there is so much variation. Other fish show color variation but not as widely as the guppy.

“These guys are sort of the champions of variation,” she said. 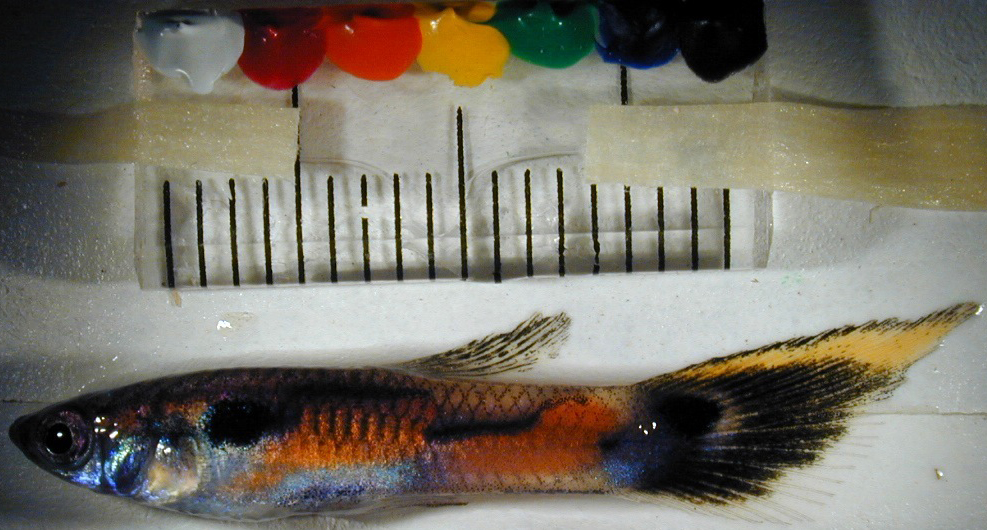 And it’s not that the rare males are simply trying harder to land a female. All male guppies do elaborate mating rituals, fanning out their fins and pursuing a mate.

The next question to answer, Hughes said, is why. Why do female guppies go for the rarest male in a particular population? It’s possible that in choosing a mate who appears unknown to her, a female guppy is trying to avoid procreating with a relative, which can lead to genetic disorders in offspring.

The guppy question speaks to alongstanding puzzle within evolutionary biology: Why are individuals within species so genetically diverse?

Understanding why species are genetically diverse is key to understanding human variation in disease susceptibility, for maintaining healthy crop and livestock populations and for preserving endangered species, Hughes said.

Hughes’ collaborators in this study are Anne E. Houde of the Lake Forest College Department of Biology in Lake Forest, Ill., and Anna C. Price and F. Helen Rodd of the Department of Ecology and Evolutionary Biology at the University of Toronto in Toronto, Ontario, Canada. Their work was supported by grants from the National Science Foundation and the Natural Sciences and Engineering Research Council of Canada.