During a brief ceremony at the MagLab, F. Fleming Crim, assistant director for the NSF Directorate of Mathematical and Physical Sciences, expressed delight at the chance to visit one of the NSF’s premier research facilities. He described it as a national treasure.

“Today is a major milestone between the NSF and Florida State University,” Crim said. “This renewal agreement is a vote of confidence in the National High Magnetic Field Laboratory by the community of users and by the National Science Foundation. It reflects the quality of the stewardship of Dr. Barron, Dr. Boebinger and everybody involved in this enterprise.”

Crim praised not only the people — administrators and researchers — of Florida State University, but also those at the University of Florida and Los Alamos National Laboratory in New Mexico.

“They are the critical component that allows the magnet lab to serve the nation,” Crim said. “They enable the science that happens here.”

Barron underscored the significance of funding from the National Science Foundation.

Barron underscored the significance of funding from the National Science Foundation. 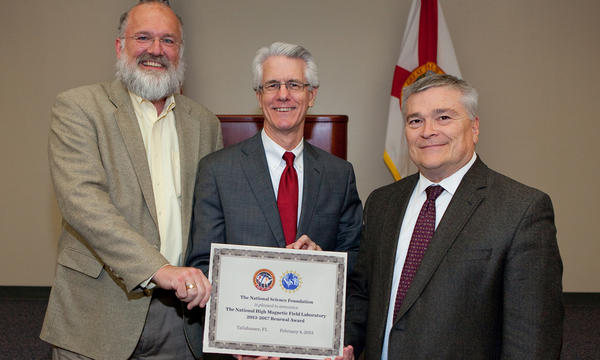 “My own scientific career was launched with a summer fellowship at an NSF-funded laboratory, the National Center for Atmospheric Research,” he said. “That and many other reasons is why NSF has become my favorite agency.”

Barron described the NSF as always competing to be the very best and representing discovery that has impact and a purpose.

“This is what I love about the magnet lab,” Barron said. “It is always competing to be the very best — and succeeding. It truly represents discovery with impact and a purpose.”

Barron assured Crim that Florida State would continue to stay true to the path of discovery for the sake of the many scientists and students who conduct research at the National High Magnetic Field Laboratory.

“We will take this truly unique partnership between institutions and the National Science Foundation and continue to make you feel very proud of what we accomplish,” Barron said.

Boebinger characterized the NSF grant as a mandate to each of the MagLab’s partners to continue realizing world-class, basic research opportunities for its community of users.

“An interdisciplinary facility like the MagLab isn’t tenable without real, sustained investment from both academia and government,” Boebinger said. “It’s wonderful to step back today and celebrate what’s been a long and tremendously successful partnership among so many institutions.”

The MagLab is the only national laboratory in Florida. It employs approximately 350 scientists and support staff. Scientists from around the world use its high-powered magnets for scientific research and academic study.

The National Science Foundation approved a $156.7 million grant for the MagLab for 2008 through 2012. The new five-year grant represents a substantial increase in support for the facility, which attracts scientists from around the world and has a substantial economic impact on the region. The MagLab also receives funding from the state of Florida.