A landmark study by Florida State University biologists, in collaboration with scientists in Britain, is the first to identify a life-or-death “cell competition” process in mammalian tissue that suppresses cancer by causing cancerous cells to kill themselves.

Central to their discovery was the researchers’ identification of “Mahjong” — a gene that can determine the winners of the competition through its close relationship with another powerful protein player. Lead author Yoichiro Tamori and Associate Professor Wu-Min Deng of Florida State and Yasuyuki Fujita of University College London named the newfound gene after the Chinese game of skill and luck.

The findings shed light on the critical interactions between cancerous cells and surrounding tissue, and confirm that those interactions occur not only in fruit fly models but also in mammalian cell cultures.

Tamori and team found that Mahjong binds to and interacts with the tumor suppressor gene “Lethal giant larvae” (Lgl). That bond allows Mahjong to influence the outcome of cell competition, because it is mutations in Lgl — or in genes interacting with it — that transform a normal cell into a malignant one, triggering the lethal showdown between neighboring healthy cells and cancerous ones.

“A better understanding of the ways that inherited or acquired mutations in key proteins lead to cell competition should help foster new therapies that increase the odds of victory for normal cells,” said Tamori, a postdoctoral fellow in Florida State’s Department of Biological Science. PLoS Biology will publish the findings, which the researchers describe in their paper “Involvement of Lgl and Mahjong/VprBP in Cell Competition.” The article can be accessed online at www.plosbiology.org. 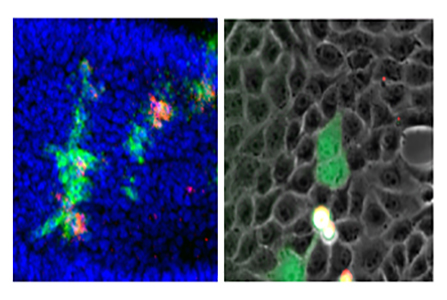 The study began with a focus on Lgl, a gene that normally prevents the development of tumors by tightly controlling cell asymmetry and proliferation. To more fully understand its role in cell competition, the Florida State and University College London biologists looked at Lgl in both fruit flies and mammals. They knew that earlier studies of Lgl’s structural qualities had concluded that it worked in tandem with other proteins. To try to identify its possible partners, the researchers used a technique that worked to trap both Lgl and any proteins bound to it.

They learned that Lgl had just one binding partner — soon to be known as Mahjong.

“In addition to identifying Mahjong and its relationship with Lgl,” said Deng, “we confirmed that both genes function in the same pathway — in both fruit flies and mammals to regulate cellular competitiveness.”

To determine if a mutation would induce cell competition in fruit flies, the Florida State biologists modified fly larvae by deleting the Mahjong gene from subsets of the wing-tissue cells.

Then, using a fluorescent probe that can identify cells undergoing apoptosis (a form of programmed suicide), they saw that cell death was occurring in the Mahjong mutant cells that were adjacent to normal cells, but not in those surrounded by fellow Mahjong mutants.

“In competition with their normal neighbors,” said Tamori, “cells without Mahjong were the losers.”

After Tamori and Deng confirmed the role of Mahjong in fruit fly cell competition, their collaborators at University College London sought to induce competition in mammalian cells.

To replicate as closely as possible the occurrence of mutations caused by environmental factors, Fujita and his team engineered kidney cells whose copies of the Mahjong gene could be shut down by the antibiotic tetracycline. Before adding tetracycline, they mixed the engineered cells with normal ones and allowed them to grow and form tissue.

“When tetracycline was added to the tissue, the cells in which Mahjong had been shut down began to die, just as they had in the fruit fly,” Tamori said.

“In the kidney cells, as in flies,” he said, “apoptosis was only observed in Mahjong mutants when they were surrounded by normal cells. We now had a clear demonstration of cell competition in mammalian tissue, triggered by mutations in a key protein.”

Next, the team sought to prevent apoptosis in cells that lacked Lgl or Mahjong by copying the remaining protein partner in larger-than-normal numbers.

Funding for the study came from a five-year grant to Deng from the National Institutes of Health (NIH). A developmental and cell biologist at Florida State since 2004, Deng is recognized for research in the model organism Drosophila melanogaster (fruit fly) that has enhanced understanding of gene regulation and signaling pathways linked to cancer and other diseases.

Deng’s NIH grant supported another recent study that also has advanced cancer research. In collaboration with scientists from the Johns Hopkins University School of Medicine, Deng and Florida State colleagues studying the “Hippo” tumor suppressor pathway identified an influential new gene there, which they named “Kibra.” Their findings were published Feb. 16, 2010, in the journal Developmental Cell and discussed in the April 2010 issue of Nature Reviews Cancer.

Tamori and Deng of Florida State University and Fujita of University College London co-authored the PLoS Biology paper “Involvement of Lgl and Mahjong/VprBP in Cell Competition” with support from a team comprised of a postdoctoral fellow, graduate and undergraduate students, and a technician. From FSU, the team members were Ai-Guo Tian, Yi-Chun Huang, Nicholas Harrison and John Poulton. From UCL, they were Carl Uli Bialucha, Mihoko Kajita, Mark Norman, Kenzo Ivanovitch, Lena Disch and Tao Liu.