Virtually anyone who stays in the work force long enough will eventually have a really lousy boss — and perhaps quite a few, if that employee sticks it out until retirement age. Those lousy bosses should count themselves lucky, then, that very few long-suffering employees resolve to have them murdered, as three fed-up friends attempt to do in the black comedy film “Horrible Bosses,” which opens nationwide this weekend.

That’s not to say that everything is coming up roses in America’s workplaces, says Wayne Hochwarter, the Jim Moran Professor of Business Administration at Florida State University.

For several years, Hochwarter has studied the often volatile boss-employee relationship, focusing on factors causing hostility, stress and declining performance. His latest research shows the problem to be as acute as it’s ever been — and perhaps worse, considering the lack of viable alternatives for millions of unhappy employees.

“For workers in declining industries such as construction and manufacturing, catching on with a company able to offer comparable wages has been virtually impossible,” Hochwarter said. “Plan B just doesn’t exist for many employees at the level it did five or 10 years ago.”

A study recently conducted by Hochwarter illustrates just how poisoned the supervisor-employee relationship has become. More than 400 mid-level employees from a variety of industries were surveyed and asked to offer their views on the changing face of work. Their responses revealed some strongly negative opinions: 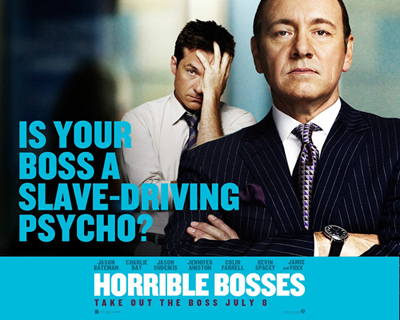 Hochwarter’s study also noted that workers enduring such circumstances are stressed both at work and at home, are less willing to exert effort for the company good, experience sleep disturbances, report declining levels of self-worth, and suffer from a variety of additional quality of life maladies.
This is not Hochwarter’s first study to examine the tensions between workers and management in the American workplace. He has previously studied supervisor behaviors (39 percent failed to keep promises, for example); perpetration by management of the Seven Deadly Sins at work (41 percent of bosses were viewed as lazy, pushing their work on subordinates); and manager narcissism (31 percent of employees reported that their boss significantly exaggerated accomplishments). Hochwarter also has examined subordinates’ reactions to an abusive boss (27 percent have hidden from an abusive boss).

With bosses like these, it’s no wonder that million of put-upon American workers will go to the movies to have a few laughs at the expense of the three put-upon schlubs who decide to take matters into their own hands in “Horrible Bosses.” Who knows? They might just feel better about their own situation.

For more information on Hochwarter’s study, contact him at (850) 591-1346 or whochwar@cob.fsu.edu. The website for the movie “Horrible Bosses” can be viewed here.