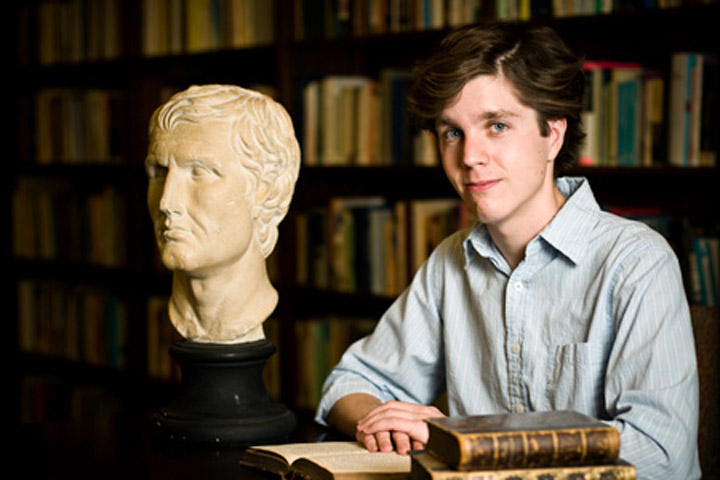 “I chose FSU because of its reputation for academic excellence.”

The author Zora Neale Hurston once said, “Research is formalized curiosity. It is poking and prying with a purpose.” That definition nicely encapsulates the research work senior Aaron Brown has participated in over the past couple of years.

Brown is double majoring in classical archaeology and Latin and has been working with Professor Nancy de Grummond and other undergraduate researchers on the meaning of Etruscan sigla, mysterious markings with similarities to modern graffiti. Discovered on ancient artifacts unearthed at FSU’s archaeological field school in Italy’s Tuscany region, the group’s findings are added to the International Etruscan Sigla Project, an FSU-sponsored database of these enigmatic markings.

During the summer of 2010 in Tuscany, Brown supervised the excavation of what appears to be an ancient cistern, which may have played a part in rituals associated with a nearby sanctuary. Brown then gave a presentation on findings from the site — specifically, the sigla on some ceramic handles — at a University of Milan conference that same summer.

To fund his European research, Brown has been successful in securing several scholarships, including an FSU Undergraduate Research and Creative Activity Award (URCAA). He used this prestigious award to finance additional research at the sanctuary site this past summer, and his findings were then presented during the fall URCAA symposium.

A Tallahassee native, Brown has maintained a GPA that regularly lands him on the President’s List. He has also earned membership into several academic honor societies, including Phi Beta Kappa and the national Latin and Greek honor society Eta Sigma Phi.

With both parents being FSU graduates and two grandparents having taught here, attending Florida State might have been a foregone conclusion for Brown. He dispels that notion, however, saying, “I chose FSU not because of any family expectations but because of the university’s reputation for academic excellence and its renowned program in classical archaeology, which combines my interests in classical civilizations, history, language and archaeology.”

Outside the classroom, Brown has served as a volunteer docent at several local museums, including Mission San Luis and the Museum of Florida History, and has also worked in the former’s archaeological laboratory.

Upon graduation, Brown plans to attend graduate school and continue his study of Mediterranean archaeology, with aspirations for a career as an archaeology professor.