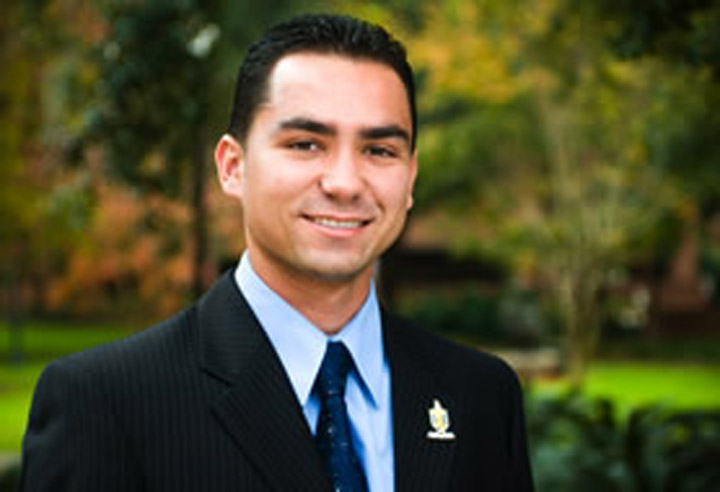 “Not only was I able to increase my knowledge of the Russian language by leaps and bounds, but I was also able to form a close friendship with my host-family, whom I now consider my second family and still keep in contact with them.”

Aleksey Sanchez is double-majoring with a B.A. in Russian and a B.S. in International Affairs, and a minor in Business. In addition to maintaining high academic standards of a 3.84 cumulative GPA, and recognized on the President’s List this past fall semester, he is committed to serving the FSU and Hispanic communities.

Mr. Sanchez has received multiple scholarships due to his academic success, which has allowed him to study around the world. During Summer 2008, he received a Department of State Critical Language Scholarship to study in Astrakhan, Russia. “Not only was I able to increase my knowledge of the Russian language by leaps and bounds, but I was also able to form a close friendship with my host-family, whom I now consider my second family and still keep in contact with them.”

This past summer, he returned to study at Moscow State University on the Winthrop-King Undergraduate Scholarship awarded to him through the Department of Modern Languages. “Studying in the capital of the Russian Federation at the most prestigious institution in all of Russia, Moscow State University, was an unforgettable experience that reinforced my passion to continue learning the language, culture, and history. One of my most memorable experiences during my time in Russia was being able to visit my hometown of Tula, where I was born, and seeing the university where my parents met and studied.” Mr. Sanchez also receives the Freshman Incentive Scholarship as well as Florida Bright Futures, and has been on the Dean’s list every semester.

Mr. Sanchez is involved on campus. He has served as a Resident Assistant for Deviney Hall and DeGraff Hall, as well as a receptionist in Deviney Hall. As described by his nominator, “he went above and beyond his call of duty as a resident assistant and his fellow floor members both respected and looked up to him.”

Aleksey says, “The best thing about being an RA, in my opinion, is getting to know the residents I work with and building friendships with them and especially with the staff I work with. From being an RA, I can say that I’ve made some really close friends and that has been the best reward.”

In addition to his campus involvement, Mr. Sanchez is also actively involved in the community. He served as the Public Relations Chair for the National Hispanic Business Association (NHBA). As Public Relations Chair, he was able to raise awareness for the organization, which led to the organization’s admittance into the Hispanic-Latino Student Union in fall 2008. He also served as the 2009-2010 President of Lambda Theta Phi Latin Fraternity, Inc. where he has worked diligently with his fraternity brothers on community service projects and philanthropies to support Boys and Girls Club of Tallahassee. “The Presidency position was a very challenging and rewarding role that taught me a lot about time management, motivating others, and bringing a group of people together to achieve common goals.”

Aleksey plans to study in Russia for one year. He has been recommended for a Fulbright English Teaching Assistantship, and has also has applied to the Flagship Program to study in St. Petersburg, Russia for 9 months. Aleksey has also applied to a number of domestic graduate programs in hopes to pursue a Master’s Degree in International Relations. “Graduate school and a full-year experience in Russia are both goals I want to achieve, and it is only a matter of which one I will undertake first.” He hopes to work as a Foreign Service Officer for the Department of State and be able to further and improve relations between the United States and Russia, by instilling mutual respect and understanding.