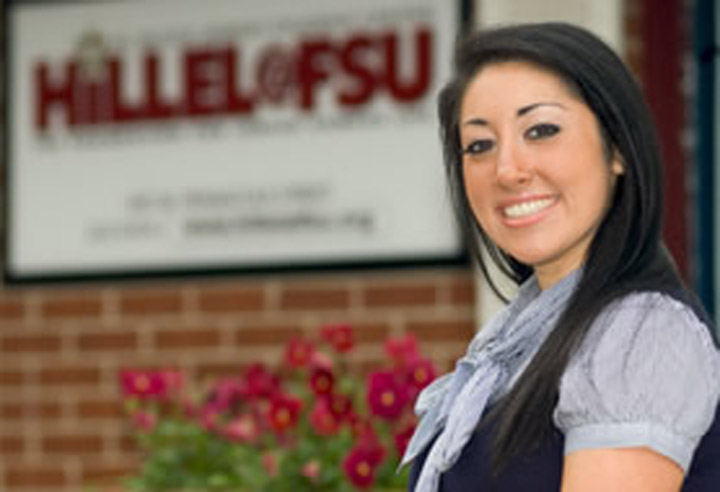 “In Judaism, we are taught at a young age about Tikkun Olam, which means 'repairing the world.' I embrace the idea that you and I can change the world.”

“Being a member of the Jewish American community can be very hard—remembering the Holocaust and the security issues in Israel. I have learned, however, that being different is also a blessing. In Judaism, we are taught at a young age about Tikkun Olam, which means ‘repairing the world.’ I embrace the idea that you and I can change the world,” says Jenna Citron, a winner of the Center for Civic Education and Service’s 2008 Student Profiles of Service Award.

In her senior year of high school, Jenna became involved with The March of the Living, an international, educational program that includes a year of extensive Holocaust studies, a two-week tour of the Nazi concentration camps in Poland, and a visit to Israel. “In the gas chambers of Majdanek, the eeriest camp, you can still smell the poison. You’re overcome with sadness, while holding back anger. You’re happy at seeing the survivors’ strength, but then you’re sad again when you think how we all take life for granted. I continue to tell the stories of the horrors that occurred there, while some deny that they did.

“However, I have realized that their stories are not the only ones. All over the world people suffer the horrors of corruption and war, of hatred and ignorance. I believe in being the voice for those who cannot be heard, which is why public service is so important to me.”

Jenna entered FSU to study Political Science, which she believes is a “stepping stone for change.” That first summer, she was introduced to the opportunities for service through the “amazing” Service Leadership Seminar, and she was selected for the highly competitive Service Scholar Program, which enables students to follow their own path of service. Her path was to help create the Student Darfur Awareness Group. As a board member, Jenna hosted Date for Darfur, which raised awareness of the lingering crisis and which supported passage of Florida’s Darfur Divestment Bill.

She says, “At a university as large as FSU, it’s easy to get lost. I quickly chose a home for myself at Hillel.” For the past two years, Jenna has served as vice president for this international organization, which helps students retain their Judaism. “Since Jews make up only two percent of the U.S., it is very easy to get caught up and forget where you came from.”

She also serves on the board of the Middle East Peace Association (MEPA), which promotes peaceful dialogue and interaction. For Middle East Peace Month (February), Jenna, realizing “there is no better way to promote dialogue than through the stomach,” hosted the More Alike than Different dinner, bringing Hillel and MEPA members together. MEPA also sponsors Persian Mornings, Israeli Afternoons, and Arabian Nights, an evening of music, poetry, dancing at the Club Downunder.