The Florida State University President’s House is filled with historic images, books and memorabilia precious to the institution. Now, a new plaque acknowledges the woman responsible for designing and raising money for the building where FSU’s first family resides.

Virginia “Ginger” Wetherell served as First Lady of Florida State from 2003 to 2010, while her husband, T.K. Wetherell, was president.

The FSU Board of Trustees and now-President John Thrasher, who was serving as BOT chair at the time, charged Mrs. Wetherell with oversight of the construction of a new President’s House — a place where events could be held and FSU friends and alumni could be welcomed to campus.

In a full-circle moment, Thrasher unveiled a plaque in Wetherell’s honor that will hang in the house for perpetuity.

“We’ve had a wonderful relationship with the Wetherells,” Thrasher said. “This is a small, small token of our appreciation for everything you have done, not only building this house, but I know how tough it is to be the first lady. It’s a big job and you did it well.”

Work on the house began in 2005, and Wetherell spent two years as project manager directing several artisans in the house design and guiding the construction process. The result was a 13,068-square-foot Greek Revival-style structure, honoring Florida State’s heritage and history.

“It’s a nostalgic day for me,” Wetherell said. “I’m just flooded with memories today, walking up the steps and seeing how the trees have grown that we transplanted here, seeing the house in such perfect condition. It still looks perfectly new, fresh and beautiful. I’m thrilled.” 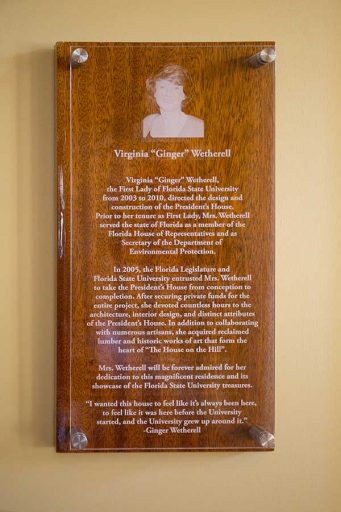 From West Tennessee Street, the President’s House — affectionately referred to as “The House on the Hill” — has served as the backdrop for a variety of social events where guests are able to admire the work that the former First Lady put into the house’s design and decoration.

The house is filled with antiques donated by FSU alumni and historic works of art from the university’s Museum of Fine Arts, as well as several paintings on loan from the John and Mable Ringling Museum of Art in Sarasota.

Wetherell, a former member of the Florida House of Representatives and secretary of the Florida Department of Environmental Protection, said the stars aligned when she was asked to take on the task, noting she’s always had a passion for architecture.

“Greek revival is my favorite,” she said. “I’m really not happy unless I’m building something.”

At the recognition, guests reminisced about the journey to the house’s completion. Building contractor Skip Sheffield recalled the time Wetherell climbed a ladder and started painting a wall because the hired painters were late.

Wetherell honored all the people who played a role in the house’s building, including Sheffied, saying they truly deserved the recognition.

“Each of you had such a special role in making this house happen,” she said. “I have so many happy memories, not just of the building of the house, but living here. T.K. and I were so happy in this house. We had some of the greatest experiences of our lives here. I’m just blessed beyond belief.”