Awarded the Nobel Peace Prize in 1980, Esquivel has dedicated his life to advancing human rights in his home country of Argentina, as well as other countries throughout Latin America. After Argentina began to repress under the leadership of Dictator Jorge Rafael Videla, Esquivel led hunger strikes and founded El Servicio de Paz y Justicia (The Peace and Justice Service), a society committed to defending human rights through nonviolence.

Esquivel also founded the United Nation’s Human Rights Commission, after which he was jailed and tortured by Videla’s regimen for 14 months. Released in 1978, Esquivel has never ceased in his work for human rights or assisting the disenfranchised.

President John Thrasher thanked Esquivel for sharing his wisdom with the Florida State community, as well as the hundreds of middle and high school students that would attend the Southeast PeaceJam’s weekend conference.

“It’s fitting that this event is held at Florida State,” Thrasher said. “We believe so strongly in developing leaders who will be at the forefront of positive social change that we have a whole center devoted to it. What better role model could we find to promote this ideal than Adolfo Pérez Esquivel? He has been a courageous leader in advocating for the peace and true democracy for the people of Latin America.”

Jaime Bayo, a Florida State alumnus who has been involved with the event for the past seven years, served as master of ceremonies.

“We work with these wonderful individuals who have been doing so much to change the world and we are very, very proud to be able to host them here at Florida State University,” Bayo said. “It’s really quite an honor and it’s something we really value for our college students here and as well as the young people that will come here from throughout the southeast.” 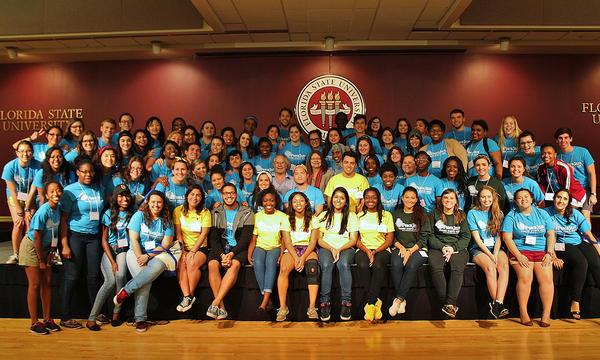 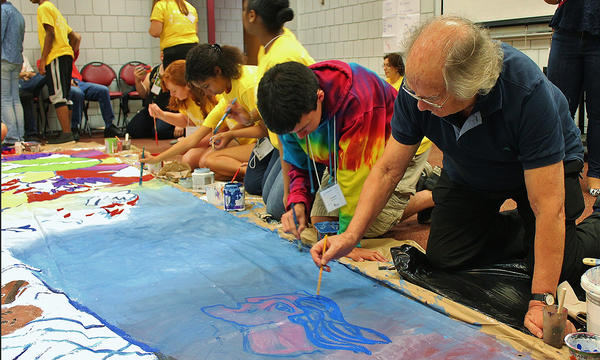 Rody Thompson, PeaceJam Southeast affiliate director at the FSU Center for Leadership and Social Change, introduced Esquivel to the attentive audience, including students from the center who are interested to making a difference and committed to social change.

Esquivel, who only speaks Spanish, encouraged students to communicate with him through their hearts. Alongside his friend and translator Beverly Skeene, Esquivel told students to unite to build peace — not simply be a spectator to suffering and injustice.

For 25 years, Esquivel taught architecture and sculpture to students on every educational level. His artistry was reflected in his eloquent speech full of metaphors and stories that showcased what it means to be a leader of global justice and peace.

“Wisdom isn’t just found in books or in people that read a lot of books,” Esquivel said. “We can have a lot of knowledge, but no wisdom. I think that wisdom really has to do with people who really feel life, who have a sense of life and who live that sense of life. Wisdom is very scarce, like water. But in life’s journey, each of us is able to find those wise men and women who are able to help us find the way forward.”

After Esquivel’s lecture, the audience participated in a question and answer session with the Nobel Peace laureate. Several students asked questions regarding their home countries’ conflicts in Columbia and Nicaragua, as well as how social media trends and individualism affect social change.

A first-year Florida State student, Inam Sakinah, looked to Esquivel for advice on how the oppressed can transform their anger into love and peace. Upon finishing her question, the audience began snapping their fingers in affirmation, pleased that someone asked such an enlightening question.

Esquivel responded by saying that the first step in overcoming hatred is to recognize that no one person has the whole truth, but that we have to come together to build it.

“We have to think very clearly, we have to settle in and really see what it is we want to achieve,” Esquivel said. “We really have to develop a sense of dialogue and a capacity to dialogue, a real willingness to look at a person and see where they are coming from, whether it’s at a personal level or conflicts in society or cultural conflicts.”

PeaceJam Southeast is a part of PeaceJam, an international education program built around Nobel Peace Prize laureates who work personally with young people to pass on the spirit, skills and wisdom they embody.

Passing on his experiences and knowledge to the next generation of leaders, like those involved in PeaceJam, is an important aspect of Esquivel’s life.

“We all go through life and life goes through us, then it all comes to an end,” Esquivel said. “So, for all of us, I think it’s important to pass the baton. What’s really critical here is that we need to pass on is a sense of memory. It’s how we learn from the past and how we carry it forward. If the community isn’t rooted in it’s past and isn’t able to learn from those experiences and carry them forward, then they will have no future.”