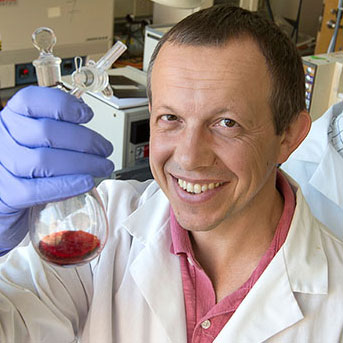 Research from a multidisciplinary team of Florida State University scientists shows that fast motion of small organic molecules in an unconventional crystal can be leveraged to develop new materials for use in sensors and other technologies.

Michael Shatruk, the Cottrell Family Professor of Chemistry and Biochemistry, and his team found that external stimuli such as temperature, pressure or light could be easily harnessed to change the magnetic properties of these molecules. The discovery of this behavior opens the possible path to designing new sensor materials that are sensitive to small signals and minor environmental changes.

The study is published in the Journal of the American Chemical Society.

The researchers examined a type of organic molecule called a radical that is characterized by an unpaired electron and is prone to a process called rapid dimerization. In dimerization, two molecules come together to form a chemical bond that can stabilize the system.

Some small molecules form so-called plastic crystals, in which the molecules remain constantly in motion. The researchers found that radicals in such plastic crystals can be pushed to dimerize by decreasing temperature or applying pressure to the material.

“Organic radicals contain unpaired electrons, which generally make them unstable – they tend to react rapidly to pair up the electrons and form more stable molecules,” Shatruk said. “But if you want to use such systems practically, they have to be stable. We were interested in looking at molecules that would be stable under ambient condition yet show the potential for making and breaking chemical bonds between the radicals in a process that we could control.”

The molecule the group focused on is called N-oxyl-adamantane. It’s a compound made of nitrogen, carbon, hydrogen and oxygen and is typically used as a catalyst to oxidize other organic compounds. But it has an unusual characteristic that tipped researchers off that it might be a candidate for their experiments.

Batches of this compound obtained from commercial sources appear in two different colors – red and yellow. Darker colors like red typically indicate that a molecule is in the paramagnetic radical form, meaning they are weakly attracted to a magnetic field. In contrast, the lighter yellow generally is a characteristic of a molecule that is neither attracted nor repelled by a magnetic field.

Shatruk’s former postdoctoral researcher noticed the compound being advertised as both in a supply catalog and brought it to the professor’s attention as a candidate for their experiments.

They found that the molecule was highly sensitive to external stimuli. Decreasing its temperature by just 1 degree from -6 degrees Celsius (21.2 Fahrenheit) could abruptly stop the molecular rotation and initiate dimerization or radicals, causing a remarkably abrupt change in the structure and magnetic properties. Applying a small bit of pressure could make a big difference too.

“It doesn’t require much pressure, even just squeezing it between your fingers can make a difference,” Shatruk said.

Former FSU postdoctoral researcher Alina Dragulescu-Andrasi served as the lead author on this study. FSU Professor of Physics Stephen Hill, Associate Professor of Chemistry and Biochemistry Yan-Yan Hu and Associate Professor of Chemistry and Biochemistry Eugene DePrince also contributed to this work, along with current and former postdoctoral researchers and graduate students from FSU and the FSU-based National High Magnetic Field Laboratory. They were also joined by researchers from University of Waterloo, Oak Ridge National Laboratory, and University of Chicago in a collaborative project that employed a broad range of experimental and theoretical techniques to understand how the stimuli-responsive behavior takes place.

This work was funded by the National Science Foundation.