Would you be surprised to learn that art students use engineering software on their work? Or laser cutting? How about 3D printing? Much to the surprise of two engineering graduate students who took Mechatronic Art 2, these design software applications are unquestionably a part of the artistic design process.

Jason Brown, a doctoral student in Mechanical Engineering, and Charles Carbiener, a master’s student, took Mechatronic Art 2 this past spring. The course, a collaboration between Professor of Mechanical Engineering Jonathan Clark and FSU Art Professor Rob Duarte, teaches and incorporates concepts from both engineering and art and shows students how to use them in a collaborative effort.

“The goal of our collaborative course was to have students from the fields of engineering and art teach each other aspects of their own domains,” Duarte said. “We wanted them to recognize the overlap in the two seemingly disparate fields: from developing ideas through sketching on paper to programming microcontrollers.”

In the midst of exchanging knowledge from each other’s fields, the students learned about different methods of thought that contributed to a greater final result — an interactive art installation at the Challenger Learning Center in Tallahassee.

“In a lot of ways it was very refreshing,” Carbiener said. “[The art students] came to the discussions and brought to the work a perspective that I hadn’t encountered in engineering. The ideas we had were grander than they would have been.”

When it came to creating the installation for the Challenger Learning Center, the thinking powers of both the art and engineering students allowed several ideas to come to the forefront. For Brown, however, brainstorming the ideas for the final project wasn’t easy because engineers typically figure out how to execute a product or vision for a customer. In this class, they had to both imagine and execute the art installation.

“Art students were skilled at bringing several concepts together to form a cohesive scope, a skill that is generally not emphasized during the engineering curriculum,” Brown said. 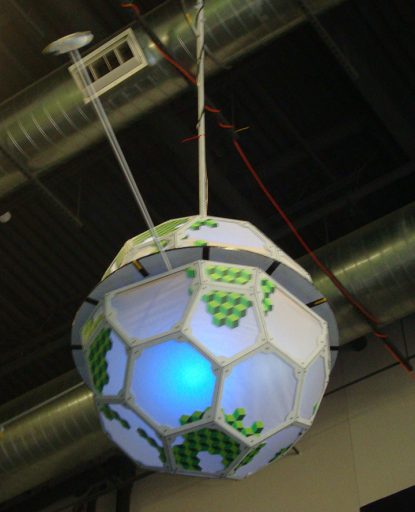 Despite the challenge of meeting in the middle, the combined efforts by the engineering and art students resulted in a space-themed pod on the first floor of the Challenger and an accompanying buckyball model of the Earth hanging from the ceiling. These two components formed an exhibit titled “Time Odyssey.”

This model of the Earth was a true merger between art and engineering. The model was made with tracing paper among other materials, and inside are LED lights that respond to the pedaling from observers in the pod below.

The Earth is a clock of sorts, displaying real time until an observer commences to sit in the pod and pedal, at which point the Earth spins and time moves faster.

The hour and minute hands are represented by levers that look like the Freedom 7 capsule and a sci-fi capsule respectively. Freedom 7 was the first U.S. human spaceflight. These hands and the Earth spin faster as the observer pedals faster. LED lights also flash intermittently until time is going by too quickly for a reasonable physical existence of space-time.

Neither planet Earth nor the pod by which observers explore time can handle this, thus a virtual energy overload causes Earth to darken as time is brought to a sudden halt, and the pod breaks down, releasing smoke. Both pod and planet Earth take a minute to recharge before the next visitor can start the mission again.

The exhibit will be on display at the Challenger Learning Center for an indefinite period of time.