Dust from the Saharan desert is bringing needed iron and other nutrients to underwater plants in the Caribbean, but bacteria may be the first thing to prosper from that dust.

The dust is causing the bacteria to bloom and also become more toxic to humans and marine organisms.

“This has been going on for a long time, but nobody understood it,” said Florida State Professor of Chemical Oceanography William Landing, a co-author on a new paper outlining the effect of the dust. “It’s a natural phenomenon.”

The new research was published in the May 9 edition of the Proceedings of the National Academy of Sciences.

Landing and graduate student Alina Ebling were part of a team studying waters near the Florida Keys to measure the dust and track the biological response. They were particularly interested in how the bacteria Vibrio responded to the dust that had traveled thousands of miles.

“Some are quite toxic,” Landing said. “And they can infect and accumulate in shellfish.”

Researchers, which included scientists from the University of Georgia and the U.S. Geological Survey, found that the bacteria was uniquely positioned to immediately process the dust when it entered the system. It caused the bacteria to bloom and become more toxic. And with more bacteria, there were less nutrients available for other marine life.

“They’re kind of like a first responder to the Saharan dust,” Ebling said. “All life needs iron, and Vibrio is getting to it first.” 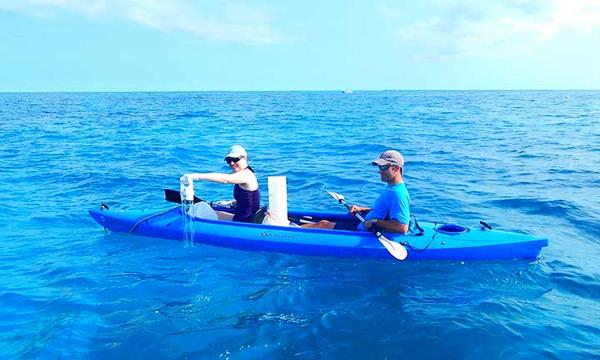 On a broader scale, scientists are eager to better understand the entire biological process of how marine life responds to this dust as added iron could “fertilize” ocean plankton and plants. A more vigorous ocean plant system would be more capable of processing additional carbon dioxide, something that could be important with climate change.

Other authors on the paper are Jason Westrich, Jessica Joyner, Keri Kemp and Erin Lipp at the University of Georgia and Dale Griffin from the U.S. Geological Survey.

The research was funded by the National Science Foundation, the National Oceanic and Atmospheric Administration, the U.S. Geological Survey Toxic Substances Hydrology Program and the Association of Marine Laboratories of the Caribbean.