Jennifer Stern goes to Mars every day. It’s her job.

Stern, a 2005 Florida State University graduate, is a scientist on the Earth-based crew that monitors and directs Curiosity, the space rover now rumbling over the Red Planet more than 34 million miles away. Before she signed up to explore Mars, though, the 36-year-old researcher earned her doctorate in geochemistry at Florida State University and worked daily for nearly four years in the geochemistry program of the National High Magnetic Field Laboratory at FSU. She left to do her postdoctoral research at the Astrobiology Division of NASA’s Goddard Space Flight Center in Maryland.

“Definitely working with all of the state-of-the-art instruments at the MagLab, getting all that hands-on experience using the mass spectrometers and other tools in geochem, helped me get this job,” Stern said in a phone interview from NASA’s Jet Propulsion Laboratory in California. “I really got to know the instruments I used at the MagLab inside and out. If you don’t understand the instrument, you don’t understand how good your data is — and that’s especially true when you’re making an instrument for outer space.”

At Florida State, Stern worked on projects involving geochemical analysis with Vincent Salters, a professor in the Department of Earth, Ocean and Atmospheric Science and director of the MagLab’s geochemistry program; Yang Wang, also a geochemistry professor; and Jeff Chanton, a chemical oceanography professor. 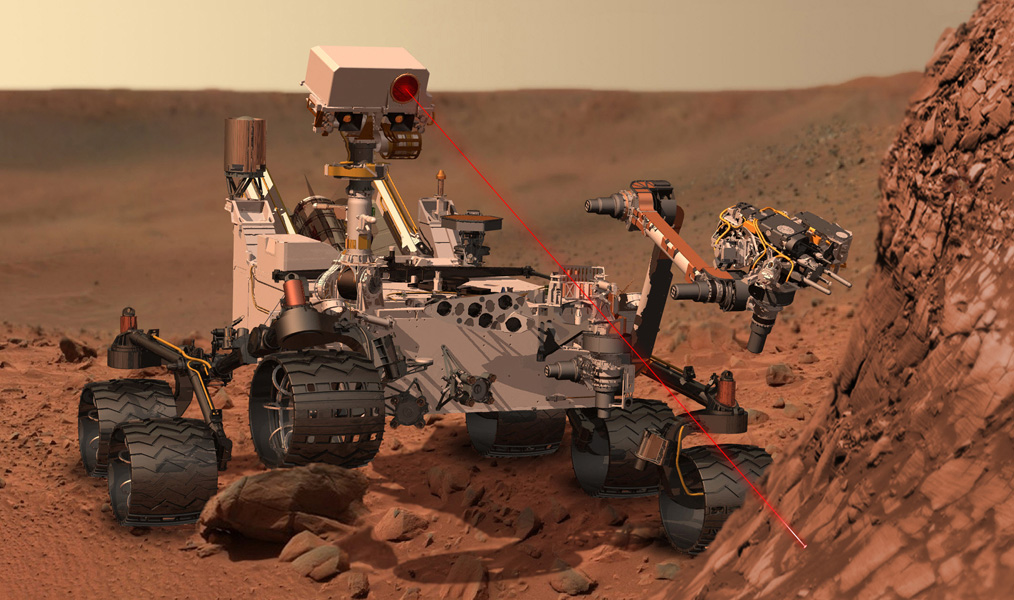 An artist's concept depicts the rover Curiosity as it uses its Chemistry and Camera (ChemCam) instrument to investigate the composition of rocks on the Martian surface. ChemCam fires laser pulses at a target and views the resulting spark with a telescope and spectrometers to identify chemical elements. (Image courtesy Jet Propulsion Laboratory) 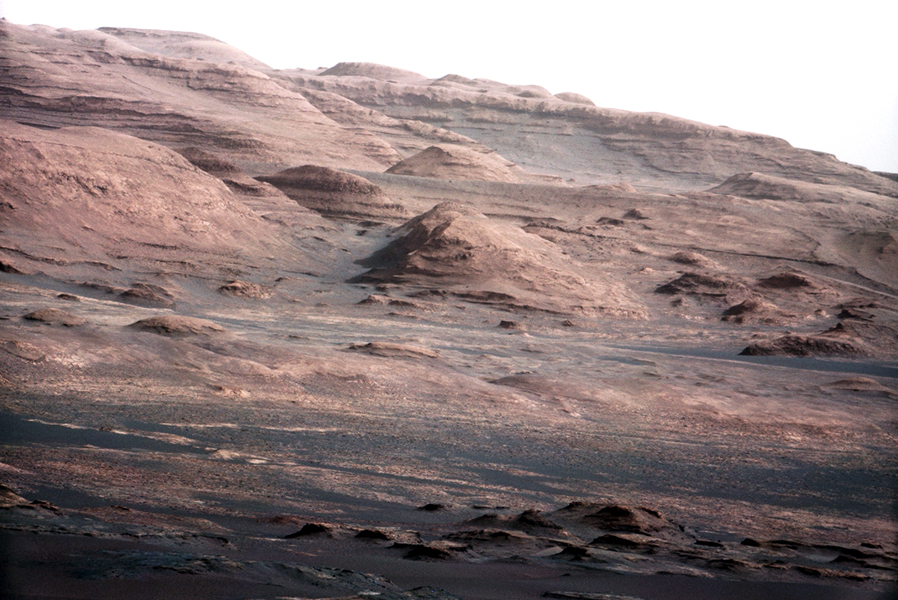 A color-enhanced image taken by Curiosity shows the base of Mount Sharp, the rover's eventual science destination. The pointy mound in the center of the image is about 1,000 feet across and 300 feet high. (Image courtesy Jet Propulsion Laboratory)

These days, robotic spacecraft — not humans — explore new worlds, controlled by scientists and engineers back home on Earth. Researchers do hope to visit neighboring planets in person one day, though, and Curiosity is intended to help “blaze a trail for human footprints on Mars,” NASA’s top administrator, Charles Bolden, has said.

Curiosity, the fourth robotic rover launched into space since 1997, made a spectacular landing on the Red Planet on Aug. 5, setting down with the help of a parachute that spanned 51 feet.

“Every time we go to Mars, there’s basically a 40 percent chance of success, so it’s amazing that everything went so well,” Stern said. “For a lot of people, that was a big relief and very exciting.”

The rover’s two-year mission is to solve the Red Planet’s biggest mystery: Can it support life? Did it ever? Does it now? Could it do so in the future? To help find answers, Curiosity has SAM (Sample Analysis at Mars), a lab on Curiosity consisting of 10 complex instruments that can analyze soil, rocks, the atmosphere and more. Stern and about 35 other scientists and engineers tell SAM what experiments to do, then analyze the data.

“We want to know what everything is made of,” Stern said. “We would love to find organic matter! . . . It’s all very fascinating. I feel very lucky to be a part of this team.”

Working with SAM has its challenges, of course. For Stern, it means being bicoastal. She flies back and forth between Goddard Space Flight Center in Greenbelt, Md., and the Jet Propulsion Lab in Pasadena, Calif. During a recent phone interview, she was in California with the rest of the SAM team.

“There’s so much to learn: There’s a bunch of different software tools and a lot of different procedures and, as a scientist, I want to learn about all of the instruments, not just the ones my team uses,” she said. “So just in terms of learning all the instrumentation and getting to know everybody’s personality, it’s so important to have the science team together all in one place . . . It’s really challenging to design experiments when we don’t know what we’re going to find!”

Because the length of an Earth day differs from a Mars day, the crew also has a yoyo-like schedule.

“My day is based on when the data is going to get sent from Curiosity back to us,” Stern said. “That means my schedule generally moves forward by about 40 minutes each day.”

In the coming weeks, her day schedule will shift to a night schedule; she’ll arrive at 8 p.m. rather than 8 a.m. But the excitement of potentially discovering signs of life on Mars makes up for it.

For the first three months of the mission, Stern and the other SAM scientists are running tests to make sure all of the robotic lab’s instruments and computer programs are running correctly both on Mars and back on Earth.

“Every instrument is being put through the basics,” Stern said. “So far, everything is going really well.”

Soon, they will begin to hunt for life on the planet. Scientists don’t expect to meet any little green Martians — that will have to remain a part of sci-fi lore — but they do hope to find evidence of former life. While Mars today is a cold, dry and apparently barren world — with an atmosphere so thin any surface water boils away — scientists don’t think it has always been this way.

“One of the questions we have is, is there methane on Mars?,” Stern said. “On Earth, methane is mostly produced by bacteria — by life. So if there is methane on Mars, and we think there may be, that would be really exciting. First, we would want to measure how much there is, and then we would want to determine where is it coming from.”

On Earth, animals such as cows and even tiny organisms all release methane — a gas that consists of four hydrogen atoms bound to one carbon atom — as they digest food. But a rock can release methane, too; a rock full of iron releases methane when the iron rusts, or oxidizes. So even if methane is found, Curiosity and SAM must run a variety of tests to discover what’s producing it.

For Stern and others, however, the mission has already achieved important goals. She sees evidence of that every time she visits a school and talks to kids about space exploration.

“When I put a picture of Curiosity up on the screen, the kids already know a lot about Mars and the rover,” she said. “If this mission gets more kids into science and gets them thinking about science careers, I feel like it’s already been a success.”