A new Florida State University study is investigating how quickly the Deepwater Horizon oil carried into Gulf of Mexico beach sands is being degraded by the sands’ natural microbial communities, and whether native oil-eating bacteria that wash ashore with the crude are helping or hindering that process.

What oceanography professors Markus Huettel and Joel E. Kostka learn will enable them to predict when most of the oil in the beaches will be gone. Their findings may also reveal ways to accelerate the oil degradation rate — and speed matters, because toxic crude components that remain buried on Gulf Coast beaches may seep into the groundwater below.

“This enormous oil spill affects hundreds of miles of beaches in the Gulf of Mexico,” Huettel said. “We can remove the oil from the beach surface, but oil is also carried deeper into the sand, and we need to understand what happens to that oil. Preventing groundwater contamination is crucial not only to Gulf Coast residents but also to coastal management and local economies like fisheries and tourism that depend on water quality.”

“We will also study the effect of the dispersant known as Corexit on oil metabolism by natural microbial communities,” Kostka said. “Through contacts in the field, my laboratory has acquired Corexit and source oil from the MC252 (Deepwater Horizon) well head for use in our experiments.”

St. George Island, Fla., and Dauphin Island, Ala., have served as the primary research sites since early June, when the one-year study began. In addition, the researchers have obtained heavily oiled sand from Pensacola Beach, Fla., and from a barrier island off the Louisiana coast. If warranted by the oil’s movement, they will also collect near-shore water and sediment samples from other Gulf beaches.

Funding for their collaborative research comes from a “RAPID” (Rapid Research Response) grant from the National Science Foundation.

Huettel and Kostka will analyze sediment cores collected from Gulf beaches to find out how much and how deep oil washed onto the shore is carried into the sand; how rapidly microbes in the sand are breaking it down; and how the oil pollution may be affecting the structure and function of natural microbial communities that help to protect water quality on the coast.

“We’ll also show how the oil itself alters the transport and filtration of oxygen-rich water into the beach by clogging the sand — and how this clogging and resulting reduced oxygen availability in the sand affects the microbial community and degradation of buried oil,” Huettel said.

Currents and winds carry the oil, and oil combined with dispersants — chemicals that disperse the crude into very small oil droplets — to the Gulf shores, where it washes up on sandy beaches.

Larger crude-oil accumulations such as pancake oil (round, flat accumulations of heavy crude oil) and tar balls (weathered crude oil accumulations that have been formed into ball-shaped structures) are deposited on the beach. Meanwhile, liquid oil (in the form of an oil sheen, or small dispersed droplets) can penetrate many feet deep into the permeable beach sand.

“Oil-filled water that washes up on the beach filters through the porous sediment and carries the oil with it into the sand,” Huettel said. “In addition, the water-level drop between high and low tide causes a water-level drop within the beach sediment that can transport oil that has penetrated into the beach into even deeper sediment layers.” 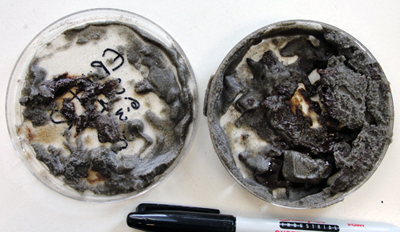 Samples provided to professors Kostka and Huettel that consist of heavily oiled sediments from a barrier island off the coast of Louisiana. (Photo courtesy of Joel E. Kostka)

“Crude oil is a natural component that constantly seeps out of Gulf of Mexico sediments — obviously in much smaller quantities than those now caused by the drilling accident — so native microbes have evolved that consume this oil and thereby degrade it,” Kostka said. “These microorganisms include bacteria and also some microalgae that live in the water column and the sediments of the Gulf of Mexico.”

Kostka said oil accumulations deposited on the beach surface are easily removed by, for example, scraping off the top layer of sand. However, the oil components that penetrate into the sand can only be removed by microbial degradation.

“If oxygen is present — as it is in the water and in the upper layers of the beach sand — the microbes decompose the oil aerobically (by using oxygen),” Kostka said. “This degradation process is much faster than the degradation under anaerobic conditions (when no oxygen is available), such as those found in deeper sediment layers of the beach. That’s why at the site of the Exxon Valdez oil spill in Alaska, oil can still be found deeply buried in the gravel beach sediments, because anaerobic microbial degradation is slow and, in Alaska, slower still because of the cold climate.”

“Unfortunately,” said Huettel, “crude oil contains such harmful substances that even small amounts can kill fish larvae — which means that oil stored in deep layers of beach sediment presents a potential source of toxins to near-shore waters and groundwater.”

Their NSF-funded study (“Rates and mechanisms controlling the degradation of crude oil from the MC252 spill in Gulf of Mexico beach sands”) is the latest of several collaborations between Huettel and Kostka that have examined organic matter transport and degradation in Gulf sands. The current project also contributes to the energy-related research that Kostka performs for Florida State University’s Institute for Energy Systems, Economics and Sustainability (IESES), which has been heavily involved in providing information and expert advice to Florida’s Governor’s Office and Legislature regarding oil and gas development.

Kostka is an environmental microbiologist and microbial ecologist widely known for his studies of the services that microbes provide to humans and ecosystems. He serves as associate director for IESES, in which he has developed and oversees an initiative he named SABER (Systems Approach to Bioenergy Research). A member of the Florida State faculty since 1999, Kostka has served since 2007 as the co-principal investigator of a five-year, $15 million grant from the U.S. Department of Energy for research on biologically mediated cleanup of radioactive waste from nuclear weapons production at U.S. DOE sites. Ongoing research in his Florida State laboratory focuses on the role of microbes in natural ecosystems in the shallow Gulf of Mexico.

Huettel, a biological oceanographer, is an expert on biogeochemical processes in coastal sediments. Central themes of his research include the influence of hydrodynamics on organic matter degradation, oxygen dynamics and nutrient cycling in coastal sediments. Before joining the Florida State faculty in 2003, Huettel was research group leader at the Max Planck Institute for Marine Microbiology in Bremen, Germany. Research currently underway in his Florida State laboratory is addressing biological and physical processes caused by gas in the sea floor; the role of turbulence for oxygen transport to and from marine sediments; and the role of pore water flows on the decomposition of dissolved organic matter in coastal sands.

To learn more about research by Huettel, Kostka and other scientists in Florida State’s Department of Earth, Ocean and Atmospheric Science, go to www.eoas.fsu.edu. For more on Florida State University’s response to the BP oil spill, visit the blog, “Gulf Oil Crisis: FSU Takes Action.”