A Florida State University researcher has identified the important role that a key protein plays in cell division, and that discovery could lead to a greater understanding of stem cells.

Timothy L. Megraw, an associate professor in the College of Medicine, has outlined his findings in the cover story of the June 15 issue of Developmental Cell. The article, “CDK5RAP2 Regulates Centriole Engagement and Cohesion in Mice,” was co-authored by researchers from the University of Texas Southwestern Medical Center at Dallas and the University of North Texas.

In August, Megraw received a four-year, $1.2 million grant from the National Institutes of Health to explore the role of centrosomes and cilia in cell division and their connections to human disease.

One long-term goal of Megraw’s research has been to discover which parts of the cell play which roles in cell division. The centrosome is an important player. When a cell is ready to divide, it typically has two centrosomes, each containing a “mother and daughter” pair of centrioles tightly connected to each other, or “engaged.”

“Two is important,” Megraw said, “because you divide your genetic material into two equal sets. Each of these centriole pairs organizes the cytoskeletal machinery that pulls the chromosomes apart. So you don’t want there to be more than two, because then you run the risk of unequal separation of the chromosomes.”

The centrioles are supposed to replicate only once during the cell cycle. What keeps them from replicating more often was discovered a few years ago, Megraw said, when researchers identified mother-daughter engagement as the key. Once those two become disengaged, it acts as the “licensing” step, in effect giving the centrioles permission to replicate. 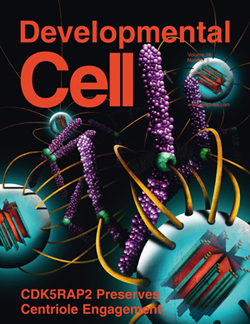 Unknown until now, Megraw said, was what regulated those centrioles to remain engaged until the proper time, to prevent excess replication. He suspected that the protein CDK5RAP2 was at least partly responsible. His team tested the protein’s role using a mutant mouse in which the protein was “knocked out” and not functioning. These researchers looked for any effects on engagement and “cohesion,” in which centriole pairs are tethered by fibers.

They noted in the mutant mouse that engagement and cohesion did not occur in their typical orderly fashion and that centrioles were more numerous and often single rather than paired. The amplified centrioles assembled multipolar spindles, a potential hazard for chromosomal stability. The researchers concluded that CDK5RAP2 is required to maintain centriole engagement and cohesion, thereby restricting centriole replication.

They are looking at how this discovery might apply to the human brain.

“The two mouse mutants we made mimic the two known mutations in humans in CDK5RAP2 — which has another name, MCPH3, in humans,” Megraw said. “The disease associated with that is a small brain.

“Our next step is to look at the brains of the mice and try to determine what’s wrong. We think it’s the stem cells — that the progenitors that give rise to all the neurons in the brain are dying early or changing from a progenitor into a neuron too early.”

Another gene called myomegalin might be functionally redundant to CDK5RAP2, Megraw said, adding, “Our goal is to knock that out, too.”

The research his lab has done might also be applicable to cancer drugs for humans, he said. Centrosomes organize microtubules, which are structures in the cell that many important anti-cancer drugs target.

“The amplified centrioles and multipolar spindles suggest that the mutant mice may be more susceptible to developing cancers,” Megraw said. “We are in a position to test this with our new mouse models.”

College of Medicine student Zach Folzenlogen created the cover design for this issue of Developmental Cell.