Building a Formula Hybrid race car from scratch made for a whirlwind spring semester for eight students at the Florida A&M University-Florida State University College of Engineering. Little did they know that their efforts would culminate in a first-place finish for fuel efficiency among all-electric vehicles at the prestigious Formula Hybrid International Challenge.

The multidisciplinary team of students had settled on an ambitious senior design project this year. Their goal: to build an open-wheel, single-seat, plug-in hybrid race car and take it to the New Hampshire Motor Speedway in Loudon, N.H., for the annual competition. The Formula Hybrid International Challenge gives engineering students from around the world the opportunity to work across disciplinary boundaries to design and build a hybrid, plug-in hybrid or electric vehicle to compete in timed and endurance events. Numerous complex elements are taken into account, and competitors are judged on everything from drive-train innovation to fuel efficiency.

“We are extremely proud of the accomplishments of our students,” said College of Engineering Dean Ching-Jen “Marty” Chen.

Upon arrival in New Hampshire, the FAMU-FSU team quickly found out that its car didn’t meet some of the competition’s qualifying requirements, as determined by an inspection.

“We had to make some adjustments,” said Preston Curry, a senior who led team members from the college’s Department of Electrical and Computer Engineering. “From the start, we became known as the team that borrowed everything. But the other schools were awesome. They let us borrow everything from tires to wrenches, and we ended up completely rebuilding the car on the spot.” 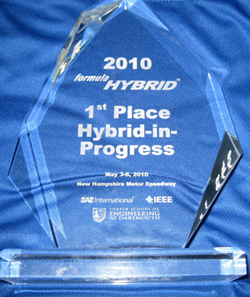 Jonathan McNally, also a senior, led team members from the Department of Mechanical Engineering. He said the team’s car simply outlasted its opponents in the fuel-efficiency competition.

“We were doing laps, and one by one other cars were dropping out — but we were still going,” he said. “It was like ‘The Little Engine That Could.’ It was an amazing experience. We even got a standing ovation from the other schools because of all we went through, which was pretty cool.”

The competitors were an intimidating bunch. One, an Italian team, had a shiny, new $500,000 car and a professional driver. The Texas A&M University team, meanwhile, consisted of more than 30 people and had a history of success in the competition. Still other teams included master’s and doctoral students. But in the end, the FAMU-FSU team’s $12,000 entry proved more than worthy against its bigger, better-financed opponents, finishing first in the all-electric “Hybrid-in-Progress” category and seventh in the overall competition.

“We weren’t the fastest or prettiest, but our car was the most efficient,” said Dionne Soto, a senior majoring in electrical and computer engineering. “We did see, however, that the teams that had the most money did the best in the design competition.”

“These students did it,” Li said. “They worked very hard, and you can see what they accomplished. It is fantastic.”

Team members expressed their appreciation to Chen and the College of Engineering for the financial and moral support that was provided. Reginald J. Perry, the college’s associate dean for student affairs and curriculum, offered words of thanks for the college’s industrial partners and to the academic departments for their efforts to spearhead multidisciplinary projects involving both the Formula Hybrid car and a separate, solar-powered vehicle.

“Without the financial donations the college received from Shell Oil, Lockheed Martin, Boeing, Northrop Grumman, and the FSU Institute for Energy Systems, Economics and Sustainability, the college would not have been able to sponsor these two projects,” Perry said. “We very much appreciate the commitment these and other companies have made to our students. This type of hands-on experience is invaluable, and we look forward to continued collaborations with our industrial partners in the years to come.”