While it is clear to ecologists that an ecosystem shapes the evolution of animals living in it, population biology experts such as Joseph Travis of The Florida State University believe the reverse can also be true, making the relationship between evolution and ecology a model of reciprocity.

Now, he can prove it.

The evidence comes from an experiment in evolution that Travis designed with David N. Reznick of the University of California-Riverside and their fellow members of an interdisciplinary research team. Findings from the study expand the body of knowledge about the interactions between evolution and ecology by demonstrating that evolutionary adaptations can also act as triggers for a cascade of in-tandem changes to both ecosystem and animal.

In the experiment, led by Ronald D. Bassar of UC-Riverside, the team used artificial streams — filled with the same spring water and insect larvae found in Trinidad’s natural habitats — to examine whether genetically distinct guppies from upstream or downstream had different effects on ecosystem processes. They compared the two types of guppies because earlier work showed that the little freshwater fish could evolve rapidly from a downstream “type” to an upstream “type.”

The team found dramatic differences between the effects of each type of guppy on the nutrient cycles and overall productivity of the stream ecosystems. Travis said the results, which emerged very rapidly during the experiment, predict that the team’s larger experiment — introducing downstream guppies to upstream habitats — will show that evolutionary change also will drive substantial changes in the ecosystem at the same time.

“Within just four weeks, the two types of guppies drove the parameters of the artificial streams in very different directions,” said Travis, the dean of Florida State’s College of Arts and Sciences and a distinguished professor in its Department of Biological Science.

The study is described in the Feb. 1, 2010, online edition of the journal PNAS (Proceedings of the National Academy of Sciences). It was funded by a five-year, $5 million grant from the National Science Foundation’s Integrative Biological Research (FIBR) program. 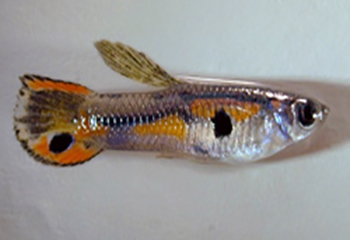 A male guppy from the upper mountain streams of Trinidad; upstream males are brightly colored compared to downstream males and, like females, grow more slowly, are more herbivorous, and live longer than downstream fish.

It is essential that scientists better understand the evolution-ecology feedback loop and the surprising speed with which an ecosystem can be altered by adaptations in a species that populates it, said Travis, because so many animals and plants are evolving in response to ecosystem changes caused by humans. As an example, he points to the overharvesting of fish, which can cause some species to get smaller and die younger, which in turn could alter their ecosystem via a feedback loop that might eventually mean no fish to harvest at all.

“Evolution can be very fast,” he said. “When our research team started this project, we already knew that downstream guppies mature earlier, make more and smaller babies, have less colorful males, and tend to be more carnivorous and less herbivorous than upstream guppies. Past work by David Reznick, our study’s principal investigator, showed that if you take downstream guppies and introduce them to pools upstream with no guppies, the descendents of those founders will evolve to look like upstream guppies in a few dozen generations.”

Travis and team hoped that their experiment would reveal whether the two types of guppies, upstream and downstream, were different enough that switching out one for the other would cause substantial changes in ecosystem processes. They collected guppies from the two different Trinidadian stream communities and placed them in the replicate, artificial streams that they’d built alongside the corresponding natural habitats.

“We also were careful to calibrate any effects against purely environmental differences, such as what one might see if we compared different, naturally occurring densities of guppies in both natural upstream and more crowded downstream conditions,” Travis said. “So, our experiment simultaneously compared the ecological effects of guppies of each type in two densities, one double the other. That design enabled us to learn whether the changes we saw in the ecosystem processes were caused by the natural differences in guppy density or the differences in the guppy ‘type.'”

“The evolutionary effects we documented are so large that an ecologist can no longer say, ‘Sure, you evolutionary guys can show some effect from genetically based differences, but those effects are small in the big scheme of things.’ Well, they aren’t small. The changes generated by the new guppy species are at least as great as those found by doubling the density of existing guppies.

“We also show that the standard approach to theory in ecology and evolution, which is to say, ‘Let’s keep ecological variables constant and study evolution’ or ‘Let’s keep evolutionary variables constant and study ecology,’ isn’t necessarily a good approximation for reality,” Travis said. “We now know that evolutionary effects and ecological effects can unfold on comparable time scales.”

Next, the researchers will examine how the feedback loop from the changed ecosystem shapes a new round of local adaptations in the relocated guppies.

The PNAS paper “Local adaptation in Trinidadian guppies alters ecosystem processes” was co-authored by Travis and research team colleagues from Cornell University, the universities of Nebraska and Georgia, Drexel University and Siena College, as well as UC-Riverside. To access a copy, visit www.pnas.org.