Is there anybody out there? In Alejandro Jenkins’ case, the question refers not to whether life exists elsewhere in the universe, but whether it exists in other universes outside of our own.

While that might be a mind-blowing concept for the layperson to ponder, it’s all in a day’s work for Jenkins, a postdoctoral associate in theoretical high-energy physics at The Florida State University. In fact, his deep thoughts on the hypothetical “multiverse” — think of it as a mega-universe full of numerous smaller universes, including our own — are now receiving worldwide attention, thanks to a cover article he co-wrote for the January 2010 issue of Scientific American magazine.

In “Looking for Life in the Multiverse,” Jenkins and co-writer Gilad Perez, a theorist at the Weizmann Institute of Science in Israel, discuss a provocative hypothesis known as the anthropic principle, which states that the existence of intelligent life (capable of studying physical processes) imposes constraints on the possible form of the laws of physics.

“Our lives here on Earth — in fact, everything we see and know about the universe around us — depend on a precise set of conditions that makes us possible,” Jenkins said. “For example, if the fundamental forces that shape matter in our universe were altered even slightly, it’s conceivable that atoms never would have formed, or that the element carbon, which is considered a basic building block of life as we know it, wouldn’t exist. So how is it that such a perfect balance exists? Some would attribute it to God, but of course, that is outside the realm of physics.” 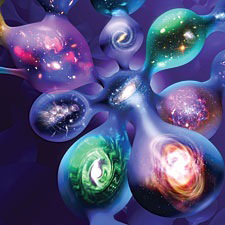 The theory of “cosmic inflation,” which was developed in the 1980s in order to solve certain puzzles about the structure of our universe, predicts that ours is just one of countless universes to emerge from the same primordial vacuum. We have no way of seeing those other universes, although many of the other predictions of cosmic inflation have recently been corroborated by astrophysical measurements.

Given some of science’s current ideas about high-energy physics, it is plausible that those other universes might each have different physical interactions. So perhaps it’s no mystery that we would happen to occupy the rare universe in which conditions are just right to make life possible. This is analogous to how, out of the many planets in our universe, we occupy the rare one where conditions are right for organic evolution.

“What theorists like Dr. Perez and I do is tweak the calculations of the
fundamental forces in order to predict the resulting effects on possible, alternative universes,” Jenkins said. “Some of these results are easy to predict; for example, if there was no electromagnetic force, there would be no atoms and no chemical bonds. And without gravity, matter wouldn’t coalesce into planets, stars and galaxies.

“What is surprising about our results is that we found conditions that, while very different from those of our own universe, nevertheless might allow — again, at least hypothetically — for the existence of life. (What that life would look like is another story entirely.) This actually brings into question the usefulness of the anthropic principle when applied to particle physics, and might force us to think more carefully about what the multiverse would actually contain.”

“Looking for Life in the Multiverse” can be purchased, or accessed by Scientific American subscribers, at the magazine’s Web site. The January issue of the magazine is also on sale now throughout the United States.

“Having an article in Scientific American is a magnificent accomplishment, but being selected for the cover story is special indeed,” said Mark Riley, chairman of the Department of Physics at Florida State. “My congratulations to Dr. Jenkins and our High Energy Physics Group.”

Jenkins has degrees from Harvard University and the California Institute of Technology, and he previously conducted postgraduate research on the topic of alternative universes while at the Massachusetts Institute of Technology. Despite all of his training, however, the Scientific American article was unexpected.

“I am very proud of our research, but to be honest, I think that this had something to do with the fact that people are naturally intrigued by speculative ideas about cosmology and the ‘big picture.’ “The idea of parallel universes, in particular, is one that many people find exciting,” Jenkins said.

“The current season of (the Fox-TV comedy) ‘Family Guy’ recently premiered with an episode called ‘Road to the Multiverse,’ which was premised on the idea that one can visit other universes — although that seems impossible given what we know about physics. Nevertheless, whether other universes actually exist is a question that has consequences for our understanding of physics in this world. I think our research raises important questions in that regard.”