For much of the first half of the 20th century, meteorology was more art than science, relying heavily on an individual forecaster’s lifetime of local experience. Now, a Florida State University researcher has written a book that tells the story of the field’s transformation from a “guessing science” into a sophisticated scientific discipline based on physics and mathematics.

“Weather by the Numbers: The Genesis of Modern Meteorology” was written by Kristine Harper, an assistant professor of history at FSU, and has just been published by the MIT Press. In her book, Harper says that the greatest factor making the transformation of meteorology possible was the development of the electronic digital computer. Earlier attempts at numerical weather prediction had foundered on the human inability to solve nonlinear equations quickly enough for timely forecasting.

“A weather forecast is of little use if it is made several weeks after the weather has come and gone,” Harper noted.

After World War II, the combination of an expanded observation network developed for military purposes, newly trained meteorologists savvy about math and physics, and the nascent digital computer all came together to create a new way of approaching atmospheric theory and weather forecasting, Harper writes.

In “Weather by the Numbers,” Harper also examines the efforts of meteorologists to professionalize their discipline during the inter-war years and the rapid expansion of personnel and observational assets during World War II. She describes how, by the 1950s, academic, Weather Bureau and military meteorologists had moved atmospheric modeling from research subject to operational forecasting.

“Not only did they have to contend with barely effective models and balky computers, they faced having to convince their colleagues that numerical modeling techniques would lead to better and more timely predictions,” Harper said. 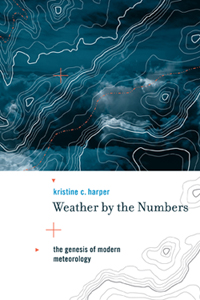 Challenging previous accounts that give sole credit for the development of numerical weather prediction to digital-computer inventor John von Neumann, Harper points to the crucial contributions of Carl-Gustav Rossby, founder of the Massachusetts Institute of Technology’s meteorology program and a member of the renowned “Scandinavian tag team” of meteorologists who worked with von Neumann. (In 1945, von Neumann had settled on weather prediction as a suitably difficult scientific problem amenable to a numerical solution to showcase the capabilities of his proposed computer.) The team’s transformation of the discipline, Harper writes, was the most important intellectual achievement of 20th-century meteorology and paved the way for the growth of computer-assisted modeling in all of the sciences.

“Having spent many years working with these models as a meteorologist, discovering their history was a fascinating experience,” she said.

While “Weather by the Numbers” is Harper’s first academic book, it promises not to be her last. She is currently writing another book on the use of weather control as a tool of the state in mid-20th-century America. Like “Weather by the Numbers,” it will address issues related to the history of science and technology, and environmental history.

“Because of my background in meteorology and oceanography,” Harper said, “I continue to be drawn to historical topics that draw on my scientific expertise and have the potential to inform policy decisions in the 21st century.”

In addition to her writing, Harper also will be teaching with FSU-Teach — a program recently created to recruit more FSU math and science majors into the teaching profession. To learn more about FSU-Teach, visit www.fsu-teach.fsu.edu.