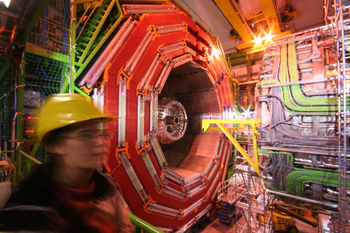 Several members of the FSU Department of Physics are taking part in the largest science experiment in history.

After 40 years of planning and construction, the Large Hadron Collider (LHC), which is the world’s highest-energy particle accelerator, is poised to provide new insights into the mysteries of the universe. Created by the greatest minds in physics from all over the world, the LHC conducted its first major test on Sept. 10 when it fired a beam of protons all the way around a 17-mile tunnel.

Located at CERN, the European Laboratory for Particle Physics, in Geneva, Switzerland,
the LHC cost $10 billion to build, and its resulting data have the potential to explain why we and the universe exist. The collider will allow researchers to smash protons toward one another at speeds approaching the speed of light, trying to mimic what happened in the fraction of a second after the Big Bang.

“The word ‘historic’ is overused,” said Harrison Prosper, a professor of physics at FSU. “However, in the case of the start of the LHC, the word is apt. This will be a historic milestone in the history of science. If things unfold as we hope, the start of this extraordinary science project could mark the dawn of another golden age of discovery in physics. We have been waiting for something like this for more than 30 years, and it is just thrilling that FSU is a part of this.”

Several members of FSU’s High Energy Physics group are conducting experiments in one of CERN’s large research facilities, called CMS, or “Compact Muon Spectrometer,” which will use the LHC to record data about these high-energy proton-proton collisions. CMS, which is known as a general-purpose detector, is one of two at CERN that are designed to detect the Higgs particle, dark matter and a host of new subatomic particles, such as supersymmetric partners of the standard family of elementary particles.

“The discoveries possible at the LHC could revolutionize our understanding of nature in a way that has not happened during my career,” said Associate Professor Adams. “It is a very exciting time to be working at CERN.”

Mark Riley, chairman of the FSU Department of Physics, called it “an incredibly exciting time, not only in high-energy physics but for all of science. It is wonderful that physicists from FSU are deeply engaged in this momentous endeavor.”

To learn more about CERN and the Large Hadron Collider, visit this link. Go to cms.cern.ch for more details about the CMS facility.