As gas prices soar, scientists at the National High Magnetic Field Laboratory at Florida State University are marketing research that will enable petroleum companies to locate, analyze and process crude oil much faster, cheaper and more accurately. The researchers’ work is solidifying Florida State’s reputation as a world leader in “petroleomics.”

Alan G. Marshall, a giant in the field of chemical analysis, and his magnet lab colleagues have signed an agreement with a California-based company, Sierra Analytics (www.MassSpec.com), which will sell state-of-the-art software to petroleum companies. With this software, the companies will benefit from research that has made FSU the best in the world at understanding petroleum.

“Crude oil is possibly the most complicated chemical mixture known to science,” said Marshall, the Robert O. Lawton Professor of Chemistry and Biochemistry at FSU and director of the magnet lab’s Ion Cyclotron Resonance Program. “A single heavy petroleum sample, for example, may contain more than 30,000 separate chemical substances. For petroleum companies to develop more efficient oil extraction and refining techniques, they need to know exactly what they’re dealing with.”

That’s where Marshall and his team come in. Using an incredibly precise analytical technique co-invented by Marshall known as Fourier transform ion cyclotron resonance mass spectrometry, they have been able to simultaneously separate and identify thousands of separate chemical constituents within a single crude oil sample. In so doing, Marshall’s group has compiled the largest database of petroleum compounds in the world — priceless information for some of the world’s richest companies. 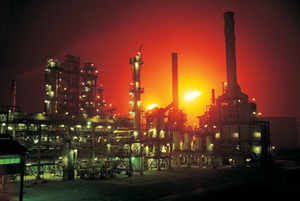 Wealth, however, isn’t the motivation behind the group’s licensure deal.

“There will be some small royalties associated with the Sierra Analytics agreement, but mostly we’re doing it to increase our visibility and enhance our reputation as the worldwide leader in the development of technologies that allow for these types of ultra-sophisticated chemical analyses,” Marshall said. “No one else even comes close. That’s why industries that work with highly complex substances such as petrochemicals, proteins, pharmaceuticals and explosives often come to us for our expertise.”

Marshall’s group also will receive 10 sets of the Sierra Analytics software and workstations as well as annual updates. The commercial value of that package has a dollar value well into six figures. In the future, the researchers and Sierra Analytics will continue to share updated information, enabling both to stay atop the burgeoning “petroleomics” field.

How does having a detailed analysis of the chemical components of a crude oil sample benefit petroleum companies? Ryan P. Rodgers, an associate scholar/scientist and director of petroleum research at the magnet lab, gave an example.

“Refiners of petroleum sell molecules, in essence,” he said. “They need to know what types of acids and other corrosive compounds are mixed in with the ‘good’ molecules so that they can develop processes to remove them. This helps to expand the functional life of their refineries, ultimately saving the company money. Ideally, such cost savings would be passed on to the consumer.”

John Fraser, FSU’s assistant vice president for Research and Economic Development, said that “the insight Alan’s group offers to the refinery companies is useful information about the crude oils the refiners have — how to adjust the refining process to maximize the production of valuable molecules and minimize waste — in other words, how to effectively squeeze more from each drop of oil. Their expertise has been utilized from the hot sands of Saudi Arabia to the frozen tundra of the Canadian tar sands. All of this further enhances the reputation of FSU.”