As the national repository for geological material from the Southern Ocean, the Antarctic Marine Geology Research Facility at Florida State University houses the premier collection of Antarctic sediment cores—and a hot new acquisition will offer an international team of scientists meeting here May 1-4 its best look yet at the impact of global warming on oceans worldwide.

The remarkable new core was extracted during the recent Antarctic summer from record-setting drilling depths 4,214 feet below the sea floor beneath Antarctica’s Ross Ice Shelf, the Earth’s largest floating ice body. Laced with sediment dating from the present day to about 10 million years ago, the core provides a geologic record of the ice shelf’s history in unprecedented detail.

In fact, a polar research news feature in the March 2007 edition of the journal Nature called the sediment core “a frozen time capsule from Earth’s icy past.”

Greenish rock layered throughout the “time capsule” indicates periods of open-water conditions, suggesting that the Ross ice shelf retreated and advanced perhaps as many as 50 times over the last 5 million years in response to climate changes, says FSU AMGRF Head Curator Matthew Olney. He notes that signs of fluctuations such as these are critical because the Ross Sea ice is a floating extension of the even bigger West Antarctic Ice Sheet—an area of the southernmost continent so unstable that scientists foresee its collapse in a world overheated by global warming.

A collapse there could raise sea levels worldwide by a catastrophic 20 feet.

Credit for the core’s record-setting extraction goes to the inaugural expedition of ANDRILL (ANtarctic geological DRILLing)—a $30 million multinational project for which FSU is playing the key curatorial role. The collaborative research initiative is the most ambitious seafloor drilling effort ever undertaken at the Antarctic margins. The National Science Foundation’s Office of Polar Programs largely funds both ANDRILL and the AMGRF at FSU. 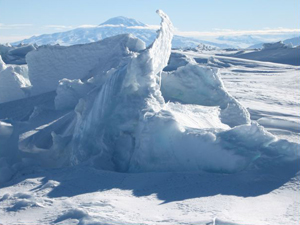 May 1-4, members of FSU’s geology faculty and AMGRF staff will welcome to campus more than 100 ANDRILL researchers—scientists, drillers, students and educators from Germany, Italy, New Zealand and the United States—for the first post-drilling meeting.

“The upcoming ANDRILL workshop at FSU will focus on the review and completion of an initial report on the first ANDRILL expedition as well as giving the scientists an opportunity to re-examine the cores now safely stored at the AMGRF,” Olney said.

The workshop also will feature a special recognition. At a reception May 1, FSU Vice President for Research Kirby Kemper will present a certificate from NSF and the international “Committee on Antarctic Geographic Names” to Dennis Cassidy, who served as AMGRF’s head curator from 1962 to 1992, and for whom a mountain in Antarctica has been named.

“Needless to say, this is a high honor for Dennis, and one that exemplifies the level of service our Antarctic Marine Geology Research Facility has provided the global community over the years,” said FSU geology Professor Sherwood W. Wise, Jr., a co-principal investigator at AMGRF, a participating (off-ice) scientist for ANDRILL and a member of the ANDRILL U.S. advisory committee.

Their curatorial duties included transporting sediment core sections seven miles from the drill site to the McMurdo Station laboratory; splitting them longitudinally into working and archive halves, then imaging each split face; taking samples from the working half for on-ice scientific description; and safely packing, logging and transporting them back to the FSU research facility.

Wise pointed out that the recent ANDRILL expedition to Antarctica was the second such project involving AMGRF scientists, curators, and students within a six-month period—the first being the SHALDRIL (“Shallow Drilling”) cruise in which FSU took a leadership role. “It’s been a very busy year at our facility, with six FSU participants on both projects involved in the science to various degrees while providing curatorial support to both,” he added.

FSU and its ANDRILL partners already are gearing up for the next excursion, scheduled for October 2007 during the Antarctic spring. Still, the inaugural trip was especially memorable.

“So many scientists and technicians brought together from around the world for the first time and under taxing conditions made for a challenging work environment,” Olney said. “Yet, the entire ANDRILL team did a superb job with one aim in mind: recovering a record-breaking geological record that will remain a legacy to the scientific community for decades to come.”

The National Science Foundation’s Office of Polar Programs established the Antarctic Marine Geology Research Facility at FSU 45 years ago. An adjunct of the FSU geological sciences department, AMGRF is one of FSU’s two national user facilities (the National High Magnetic Field Laboratory is the other). To learn more, visit www.arf.fsu.edu.