Home / News / Science & Technology / Fire ants: Their true story told by the scientist who loves them

When it comes to fire ants, most people prefer to wipe the venomous little varmints off the face of the Earth—or at least out of their own back yards. The reviled South American native that invaded the U.S. Sun Belt via 1940s Mobile, Ala., is known in biology circles as Solenopsis invicta and everywhere else as a painful pest in the grass, so to speak.

An ardent fire ant fan and one of its foremost researchers for more than 30 years, Florida State University’s Distinguished Research Professor of Biological Sciences is the author of an encyclopedic new tome—aptly titled “The Fire Ants”—that peers have called definitive and lay readers are likely to find both engaging and instructive.

In fact, an April 25 review in the New York Times declared, “This is what the public needs to know about science, not just the results presented in the driest form possible.”

Throughout 723 anything-but-dry pages, Tschinkel aims to help readers better understand, if not appreciate, both the social biology and ecology of a despised creature and the hows and whys of scientific research. Along the way, he offers rare glimpses into the sometimes maddening lab-and-field lives of “myrmecologists”—scientists who specialize in the study of ants.

Why fire ants? “It’s a no-brainer,” he said. “They are wonderful animals. I love them.” 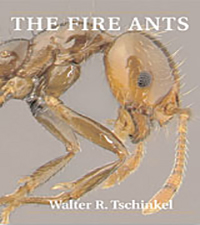 Hot off the Harvard University Press in mid-April, “The Fire Ants” features a cover photo of a magnified S. invicta that only a mother or myrmecologist could love, though Tschinkel hopes readers will eventually succumb to its charms. His opening chapter explains that the book was written in part for those “still open-minded enough to be intrigued, charmed, or fascinated.”

“The notoriety of pesthood has certainly created a large fire ant folklore and scores of amusing factoids,” he writes, though that same notoriety has generated substantial research as well.

From a list of S. invicta’s most endearing qualities he cites abundance; there’s no shortage of lab samples. It’s a low-maintenance animal without highly specialized habits; what scientists learn can be applied to other types of ants as well. Naturally, there’s no end to public interest in the exotic transplant—albeit mostly in the form of fear and loathing. The loathing seems a little unfair, since opportunistic fire ants will devour termites, ticks, weevils, mosquitoes and other major threats to Southern plants, property and people.

Like a sort of subterranean family album, “The Fire Ants” details emigration, growth, struggle, development and death in a complex nest of interdependent relationships marked by cooperation, competition and conflict. There’s a queen—sometimes lots of them—but everybody has a vital role to play. Change is inevitable. So are class, sex, betrayal and new beginnings.

Between chapters science-rich enough for biologists but accessible to educated readers, “The Fire Ants” has “Interludes”—wry asides on the pleasures and pitfalls as scientists measure and manipulate the ants they love (and that do indeed sting them). Tschinkel’s anecdote on shelter is titled “There’s Nothing Like Getting Plastered,” and among others, there’s also “Another Immigrant Moves West,” “You Call That Pain?” “The Heartbreak of Parasitoids” and “Gang Wars.”

With sizeable grants from the U.S. Department of Agriculture and the National Science Foundation, the intrepid researcher has probed the secrets of ant society from North Florida’s Apalachicola National Forest to the pastures of Southwood Plantation—a corporate cattle farm just east of Tallahassee—to area strip malls. The parking lot behind a local grocery store is a particular favorite.

“Fire ants specialize in exploiting disturbed habitat, and they’ve thrived in part because humans have done a lot of disturbing,” he said.

Other fun facts center on the familiar dirt mound around which smart humans cut a wide swath; it’s actually a solarium that collects heat to warm its residents. The tunnels below it hold anywhere from a few dozen to several hundred thousand of the highly territorial critters (Tschinkel has counted them but says it’s not easy). A mature colony can encompass approximately 300 feet of underground foraging tunnels—about 20,000 ant body-lengths. On a human scale, that’s the staggering equivalent of 20 miles or more.

On the FSU faculty since 1970, Tschinkel’s wide-ranging research has also encompassed the ecology of arboreal ants (a main food of the endangered red-cockaded woodpecker) and the natural history of the Florida harvester ant—or “any other species that strikes us as neat,” he said.

As for the much-maligned fire ant, he points to what he calls a 50-year-old misconception about shrinking native ant populations. Turns out it’s not the competition with fire ants, as many believe, but rather the ecological havoc created by disturbed habitats—fire ants thrive in them, natives don’t. Consequently, the USDA has wasted millions on what Tschinkel calls politically motivated campaigns to eradicate S. invicta with little or no improvement in native survival to show for it.

“Fire ants have been the victims of a good deal of bad science,” he said.

Ironically, 75 percent of the so-called native ants that inhabit disturbed habitats alongside S. invicta are immigrants, too. Like their persecuted cousins, some hail from South America—and sting.