Parents like to tell their kids, “Don’t be a quitter!” But when it comes to using tobacco, quitting is a good thing.

Three Florida State University employees — John Willis, Brian Moore and Robby McSmith — now can proudly call themselves quitters of tobacco. Each one had a reason to quit. But as the university geared up to become a tobacco-free campus at the beginning of 2014, the three tobacco users got motivated to take advantage of the tobacco-cessation programs offered by University Health Services and find the support they needed to actually become quitters.

Each one has been tobacco-free for about two years. 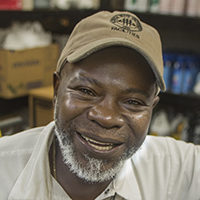 JOHN WILLIS
Smoking even a little bit, relatively speaking, was beginning to be a problem for John Willis.

“I wasn’t a big smoker,” said Willis, 51, a custodial supervisor with Facilities Maintenance who covers the Fine Arts Building, the Fine Arts Annex and the Lab Theater. “It was more like a ‘whenever I’d hang out with the guys’ type of deal. I got hooked working construction jobs. You know, every time you get a break, you have a cigarette between your fingers.”

Though he only smoked Newport cigarettes on and off for less than 10 years, Willis began to notice shortness of breath.

“I was having a hard time getting up and down steps,” Willis said. “That’s when I figured it had to be the cigarettes.”

Willis decided to start a cessation program through University Health Services in the spring of 2013 after meeting with a tobacco treatment specialist with the Health Promotion Department.
“The information she gave me really solidified the dangers and that quitting was possible,” Willis said. “That’s when I was really like, ‘OK, this is it.’ I guess I just needed to talk to someone who had a good perspective on it.”

Though the program provided lots of good information and support, quitting wasn’t easy.

“The urge to smoke was more a psychological thing,” he said. “After you eat or do some type of work — that’s when you really want a cigarette. My body didn’t want it. When I’d get a cigarette, I’d be like, ‘Why am I smoking this thing?’”

Stress from major events such as a death in the family can be a trigger to go back to smoking. On his journey to quit, Willis experienced two.

“We had a death on my side of the family and one on my wife’s side,” Willis said. “We would get kind of shaken there for a minute. So I would pick up a cigarette, but I came back around and just realized it wasn’t for me.

“You’ve got to do whatever it takes to quit,” he said. “You just can’t let situations drive you back to the cigarettes, you know?”

Willis completed his cessation program in 2013 and the results speak for themselves. He says the craving to smoke after he works or eats just isn’t there anymore. He also has found time for exercise, walking off about 15 pounds. But perhaps the biggest benefit is his wife’s reaction to his quitting.

“My wife enjoys kissing me more. She says before it was like kissing an ashtray. I didn’t realize what she was going through. She wasn’t a smoker. I’d come in the house and (the cigarette smell) would fill the house. I think she’s real happy with me right now.”

“That policy keeps you away from smoking. By the time you get home, you really don’t want one,” Willis said.

“I averaged probably a pack a day, sometimes more, sometimes less,” said Moore, 38, an AiM space consultant with Facilities Information Technology who maintains volumes of physical space data to serve the needs of various university departments and satisfy reporting requirements to the Board of Governors.

Even though he could tell his habit was affecting his physical fitness and he had known of family members who smoked and died from cancer over the years, Moore was not seriously challenged to quit until he was 32.

“My workplace went smoke free and I realized how addicted I was just trying to make it through a workday without having one,” he said. “Having a smoke was the last thing I did before work and the first thing I did after and that’s when I really started to see my habit as a problem.”

After starting work at Florida State in October 2012, Moore learned of the university’s plan to go tobacco free in 2014.

“Looking back on my previous job’s smoke-free workplace, I knew how much of a hold smoking had on my lifestyle and didn’t want to be making excuses to run off campus or hiding in stairways or behind buildings smoking after Jan 1, 2014,” he said.

To get help with quitting, he signed up for the Quit Smoking Now six-week group intervention program offered through University Health Services through an agreement with the College of Medicine Area Health Education Center program. Not sure what to expect initially, Moore wound up loving the program, from weekly meetings that kept him motivated to the complimentary nicotine patches and gum to help curb cravings.

“Talking to others who were also trying to quit was a large part of the experience,” he said. “The group I was with was funny and serious at the same time. We would talk about our failures as much as our successes in trying over the six weeks of the program.”

And best of all, Moore says the program facilitators didn’t chastise participants for not meeting their goals.

Moore experienced the physical effect of his smoking addiction with a persistent dull headache beckoning him to light up. But the most difficult aspect of quitting was psychological.

“Being around friends who smoke, drinking, after meals, watching TV and seeing someone smoke — that’s what I found the hardest to deal with,” he said.

Moore completed the program in 2013. He remains realistic, however, about smoking as an addiction.
“In the past I’ve stopped smoking for a few weeks or months and whenever I thought I kicked the habit, I could just have one cigarette or one cigar at a social gathering and I was right back to my normal pack a day,” he said. “So for me I don’t want to ever think I beat smoking.

“The difference is that I recognize it now and I know I can break the habit,” he said. (491 words)

ROBBY MCSMITH
Over 40 years of using smokeless tobacco, Robby McSmith became so addicted to nicotine that he eventually graduated to keeping snuff in his mouth while he slept.

“I wound up using two cans a day and, for five years, I dipped overnight,” said McSmith, 52, a skilled trades worker with Facilities Maintenance. “When I went to bed, I put in a dip. It was bad.”

There was also the hit to McSmith’s billfold. One can of snuff costs roughly $7 per can.

“I knew I should quit all along,” he said. “I didn’t really quit until after I got a divorce and my money got short. I had to change.”

Over the years, McSmith had tried and failed to quit on his own, usually giving up after no more than half a day. Then he decided to sign up for the university’s Quit Smoking Now program in June 2013 and, through the program’s counseling, educational materials and smoking cessation aids, he finally started to get a handle on the habit.

“When (tobacco treatment specialists Lynn Vinson and Kevin Frentz) started working with me, they really helped me,” McSmith said. “They gave me nicotine gum, lozenges and patches, and I got a prescription for a medication to help me stop. That slowed me way down — it made me not want to dip.”

To help with the psychological aspects of quitting, McSmith also used herbal snuff — the fake stuff.
“It doesn’t have any tobacco or nicotine,” he said. “In terms of taste, it wasn’t what I was used to, but it just puts something in my mouth just to help me.”

McSmith also found support from a fellow smokeless tobacco user in the class.

“All of it together helped,” said McSmith, who hasn’t touched smokeless tobacco in two years and feels certain that he has finally quit for good.

“My friends are glad for me and I’m saving my money now instead of spitting it out on the ground!”