The Tallahassee Memorial HealthCare Board of Directors and the Florida State University College of Medicine today announced plans to create a general surgery residency program in Tallahassee.

Wade Douglas, M.D., a 1991 graduate of Florida A&M University and 1992 graduate of the Florida State University Program in Medical Sciences (PIMS), has been named the program’s inaugural director after a national search. Douglas, who earned his M.D. at the University of Florida College of Medicine in 1995, currently is director of the general surgery residency program at the Edwards School of Medicine at Marshall University. He is expected to assume his new duties July 1.

“As a surgeon, I have the opportunity to improve the health of a few thousand people during my career, but establishing and developing a quality residency program will provide the opportunity to directly and indirectly improve the health of a few hundred thousand people,” Douglas said. “That’s something I’m very excited about.”

The program will be based at Tallahassee Memorial Hospital with the FSU College of Medicine as its institutional sponsor. TMH and the medical school previously opened an internal medicine residency program in 2011 and TMH also sponsors a family medicine residency program, where more than half of the graduates since 1973 have elected to practice in Florida. Of those, 137 are practicing in the hospital’s service area, significantly increasing access to primary health care services for residents of the Big Bend region.

“With the addition of a new general surgery residency program, Tallahassee Memorial takes another step in its commitment to expand access to care in the Big Bend region through graduate medical education,” said Mark O’Bryant, president and CEO, Tallahassee Memorial HealthCare. “Through our partnership with the FSU College of Medicine, this program will enhance the academic and clinical expertise available to our patients, and strengthen the TMH mission to transform care, advance health and improve lives.”

More than 10 percent of medical students graduating from the FSU College of Medicine have matched in general surgery residency programs, making it one of the school’s most popular specialty choices. Nearly 60 percent of graduates have selected one of the primary care specialties of family medicine, internal medicine, pediatrics or obstetrics-gynecology.

“This residency program addresses an important area of need in Florida, particularly in the Panhandle region,” said John P. Fogarty, College of Medicine dean. “Because many physicians end up practicing in the vicinity of where they completed residency training, we see this as an outstanding opportunity to keep more of Florida’s talented medical school graduates caring for patients where they are needed — in our home state.” 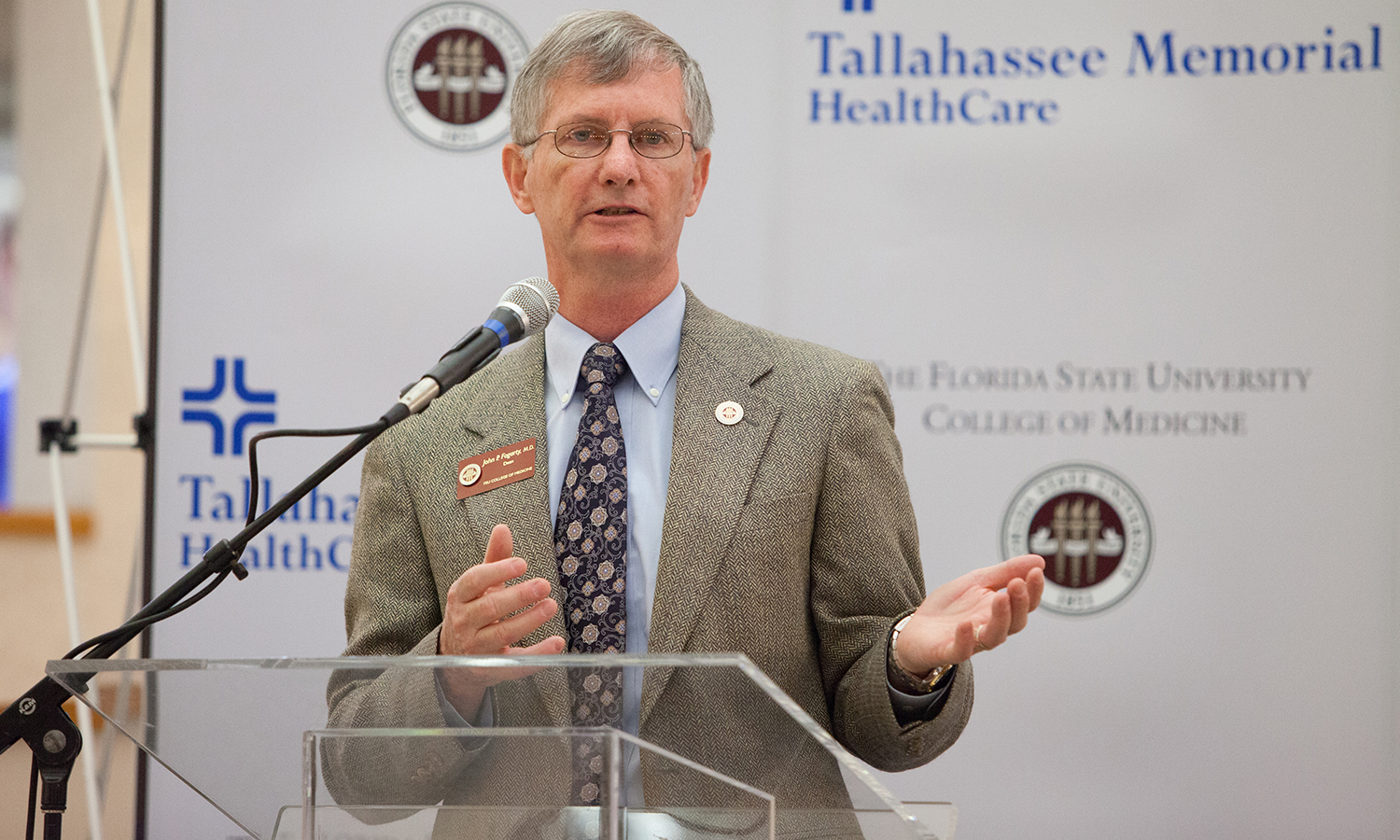 Since 2000, only 30 percent of graduating Florida medical students matching with general surgery residency programs have received their training in-state. Due in part to a lack of available slots in Florida these graduating students leave the state and many do not return to practice. Florida State’s community-based medical education program has shown better success at bringing physicians home to practice after completing an out-of-state residency or fellowship. Sixty percent of FSU medical alumni in practice are in Florida.

The new residency program also helps to address Florida’s aging physician workforce. According to the American Medical Association physician master file, nearly 30 percent of licensed physicians in the state are age 60 or older.

After his arrival in July, Douglas will begin working on developing the program and preparing to apply for accreditation through the Accreditation Council for Graduate Medical Education (ACGME). “He will play a critical role in the application process and he brings invaluable experience through his work as director of the general surgery program at Marshall University,” Fogarty said. “That’s one of many reasons he stood out among a highly accomplished group of candidates that we interviewed.”

The ACGME is a private, non-profit organization that accredits approximately 9,300 residency programs in 133 specialties and subspecialties that educate over 117,000 residents. Its mission is to improve the quality of health care in the United States by assessing and advancing the quality of resident physicians’ education.

The accreditation process could take up to one year to complete, making it likely that the first new general surgery residents at TMH won’t be in place before 2016.

Florida is on the verge of overtaking New York as the third-most populous state in the country, but ranks 42ndnationally in the number of graduate medical education slots for residency programs. The deficit was partially addressed by legislation allowing vacant residency slots to be transferred to new regions and hospitals.

While the number of residency training slots remains capped at 100,000 through 1997’s Balanced Budget Act, according to the Association of American Medical Colleges, about 1,000 slots shifted toward states with a shortage of slots compared to overall population. Florida received approximately 300 of those slots, including those that are being used to create the new general surgery residency program at TMH.

The bill making those slots available gave preference to teaching hospitals that focus on primary care and general surgery residencies, emphasize community-based training, and are located in areas with growing populations, criteria which Tallahassee Memorial Hospital satisfies on all counts.

Graduates of the new residency program would be equipped with five years of training in the field of general surgery. A general surgeon has specialized knowledge and experience related to the diagnosis, preoperative, operative, and postoperative management, including the management of complications, in nine primary components of surgery, all of which are essential to the education of a broadly based surgeon.