Innovative traffic safety research from Florida State University, incorporating a fascinating mix of engineering and psychology, is being deployed on highways to save lives by targeting a deadly problem: wrong-way driving crashes.

The statistics are alarming. Nationwide, wrong-way crashes kill about 350 people a year and injure thousands more, according to the National Highway Traffic Safety Administration.

Walter Boot, associate professor in the FSU Department of Psychology and an expert on cognition and perception, has compiled two wrong-way driving reports for the Florida Department of Transportation. The research identifies “smarter” signs and pavement markers equipped with advanced technology that can improve safety.

Boot’s recommendations will help shape future countermeasures for wrong-way driving. The Florida Department of Transportation is currently testing those and other recommendations on the most effective safety measures.

“This is a no-brainer,” Boot said. “We need to develop, test and install more visible countermeasures against wrong-way driving. We tested new technology-based, radar-triggered road alerts to determine which worked best. The evidence we collected suggested these detection-triggered countermeasures will be more effective than traditional wrong-way countermeasures.”

Boot started collecting that evidence as part of a contract with the state Department of Transportation following an unusual series of deadly wrong-way crashes in the Tampa Bay region in 2014.

One in particular, a horrific crash on Interstate 275, added urgency to the search for more effective countermeasures.

Early one February morning that year, a drunk driver drove the wrong way in the northbound lanes for more than 10 miles. Speeding toward oncoming traffic in a 5,000-pound Ford Expedition, the driver crashed head-on into a car with four college students. The fiery crash killed all five young men.

“Wrong-way crashes are rare, representing only about 3 percent of highway crashes, but they are 27 times more fatal,” Boot said. “It’s tragic, but it keeps happening.”

Boot was determined to reverse this chronic trend of wrong-way driving, which dates to the 1960s and the original construction of access-controlled divided highways. He embarked on a multiyear research project drawing on his expertise in visual processing and visual cognition to test detection-triggered wrong-way signs and pavement markers. The goal was to identify “intelligent” technology that would better detect and prevent wrong-way driving and could be incorporated into new warning systems.

Boot’s research team found that installing more countermeasures ahead of exit ramps helped, but additional warnings were needed to grab motorists’ attention once they started driving in the wrong direction. The next line of defense would be to install alerts that could cause wrong-way drivers to recognize their mistake, stop driving and turn around.

The team, working in collaboration with the Center for Urban Transportation Research at the University of South Florida and Florida International University, evaluated seven high-tech countermeasures. They included radar-triggered blank signs that immediately lit up when they sensed wrong-way motion, as well as bright beacons that flashed asynchronously.

The research included field tests on Florida highways. As a team of state troopers and traffic engineers shut down exit ramps in the middle of the night, Boot deliberately drove the wrong way on roads and ramps equipped with prototypes of the seven countermeasures.

One prototype appeared blank until it detected wrong-way motion, and then it started flashing the message “WRONG WAY.”

Boot said the sensation of driving onto an exit ramp and traveling the wrong way was surreal.

“It was frightening because I knew I was doing something very dangerous, but we had a lot of police officers there to make sure it was safe,” Boot said. “Having a firsthand perspective was valuable because I could see how countermeasures might work or not work.”

The field tests recorded video of what Boot saw as he navigated through the countermeasures. Those recordings were later used to develop scenarios that could be imported into FSU’s driving simulators.

Then Boot’s team enlisted 189 drivers to get behind the wheel of the simulators. They tested participants’ reactions to real-life highway situations.

The studies also tested the effectiveness of countermeasures on impaired drivers because those motorists account for nearly 50 percent of wrong-way crashes, according to a study by the Florida Department of Transportation. Researchers placed visual and auditory distractions in the simulators to mimic alcohol intoxication.

“The flashing onset of something new is the most effective thing you can do to draw someone’s eyes and attention, and all of the most effective countermeasures used that technique,” Boot said. “People’s brains are hardwired to pay attention to things that abruptly appear, and virtually everything we tested with a red flashing light worked well.”

“It’s helping us better understand the need for new safety technologies, and now we are testing them,” Ponnaluri said. “I think Florida is becoming a leader nationwide in developing countermeasures for wrong-way driving, and the FSU research is one reason why.” 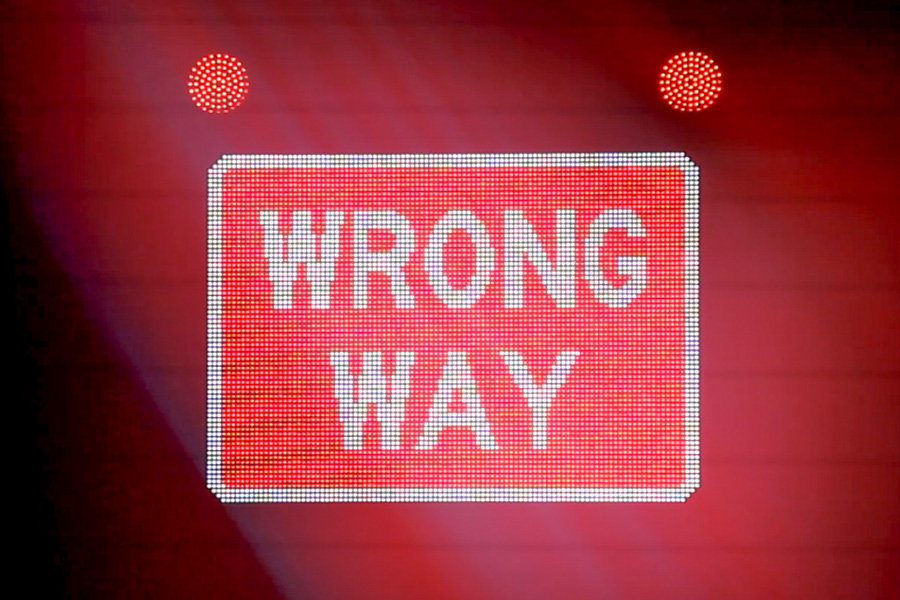